This my CreationEvolutionDesign blog is inactive. That is, I won't be posting any more blog posts to it, but I will answer comments, albeit briefly with no debate. I thought I had stated that back in March 2011 when I posted this my last blog post to it, but I am surprised to see today (17 August 2013) that I hadn't. In the interim I had decided that my final post to this blog would be my Theory of Progressive Mediate Creation. I am today confining my blogging to my The Shroud of Turin blog. Since the evidence is overwhelming that the Shroud of Turin is the burial sheet of Jesus, and bears the image of His crucified and resurrected body, it is proof beyond reasonable doubt that Christianity is true and Naturalism is false!

1.1. What is Progressive Mediate Creation? 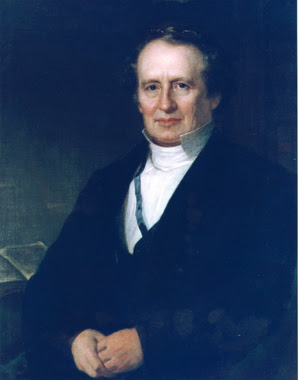 "Progressive Mediate Creation" is the view, based on Genesis 1,

that God created the raw materials of the universe immediately from out-of-nothing (ex nihilo), and thereafter He created mediately by working (both naturally and supernaturally) through natural processes and existing materials.

I take the name from the distinction by evangelical Presbyterian theologian Charles Hodge (1797-1878) between "a first and second, or immediate and mediate creation," the latter being "a forming out of preexisting material," which he called "a mediate, progressive creation":

"Mediate and Immediate Creation. But while it has ever been the doctrine of the Church that God created the universe out of nothing by the word of his power, which creation was instantaneous and immediate, i. e., without the intervention of any second causes; yet it has generally been admitted that this is to be understood only of the original call of matter into existence. Theologians have, therefore, distinguished between a first and second, or immediate and mediate creation. The one was instantaneous, the other gradual; the one precludes the idea of any preexisting substance, and of cooperation, the other admits and implies both. There is evident ground for this distinction in the Mosaic account of the creation. ... It thus appears that forming out of preexisting material comes within the Scriptural idea of creating. ... There is, therefore, according to the Scriptures, not only an immediate, instantaneous creation ex nihilo by the simple word of God, but a mediate, progressive creation; the power of God working in union with second causes." (Hodge, C., 1892, "Systematic Theology," James Clark & Co: London, Vol. I , Reprinted, 1960, pp.556-557).

"The phrase Creatio prima seu immediata signifies the originating act of the divine will whereby he brings, or has brought into being, out of nothing, the principles and elementary essences of all things. The phrase Creatio secunda seu mediata signifies the subsequent act of God in originating different forms of things, and especially different species of living beings out of the already created essences of things. The Christian Church holds both." (Hodge A.A., 1879, "Outlines of Theology," Banner of Truth: Edinburgh, Second Edition, Reprinted, 1983, pp.238-239).

in which "God uses previously created materials in his creative work":

"'Creation out of nothing', which we may call primary creation does not cover every occasion of creation. Scripture also uses the term creation for what we may call secondary creation, where God uses previously created materials in his creative work, as in the forming of man (Gn. 2:7) or the beasts and birds (Gn. 2:19)." (Milne, B., 1982, "Know the Truth," Inter-Varsity Press: Leicester UK, Reprint, 1988, p.73. My emphasis).

For example, "Man was not created ex nihilo, but out of the dust of the ground":

"At the same time, however, it is clear that the idea of primary creation contained in the formula creatio ex nihilo does not exhaust the biblical teaching on the subject. Man was not created ex nihilo, but out of the dust of the ground (Gn. 2:7) and the beasts of the field and the fowls of the air were formed out of the ground (Gn. 2:19). This has been called secondary creation, a creative activity making use of already created materials, and stands alongside primary creation as part of the biblical testimony." (Douglas, J.D., ed., 1982, "The New Bible Dictionary," Inter-Varsity Fellowship: London, Second edition, Reprinted, 1988p.245).

Progressive Mediate Creation (PMC) is a subset of Progressive Creation, i.e. "Creation was not a single six-day event but occurred in stages over millions of years" as "God intervened supernaturally at strategic points along the way":

"Progressive creationism accepts much of the scientific picture of the development of the universe, assuming that for the most part it developed according to natural laws. However, especially with regard to life on earth, PCs hold that God intervened supernaturally at strategic points along the way. On their view, Creation was not a single six-day event but occurred in stages over millions of years. ... The PC view tends to overlap with other views, particularly with old-earth creationism." (Pennock, R.T., "Tower of Babel: The Evidence Against the New Creationism," MIT Press: Cambridge MA, 1999, Fourth Printing, pp.26-27. Emphasis in original)

As a form of Old Earth Creation OEC), Progressive Creation (PC) differs from Young Earth Creation (YEC), which maintains that the Universe and Earth are only tens of thousands of years old.

PMC differs from those forms of PC which maintain that God created ex nihilo new species, including man, which even Bernard L. Ramm seemed to advocate

"Progressive creationism endeavours to explain much that the theory of evolution tries to explain, and many of the things that the theory of evolution leaves unexplained. Gen. 1 records the broad outline of the successive creative acts of God in bringing the universe through the various stages from chaos to man. Being a very general sketch it leaves considerable room for the empirical determination of various facts. A multitude of biological facts now generally accepted by the biologists would remain unchanged. In progressive creationism there may be much horizontal radiation. The amount is to be determined by the geological record and biological experimentation. But there is no vertical radiation. Vertical radiation is only by fiat creation. A root-species may give rise to several species by horizontal radiation, through the process of the unraveling of gene potentialities or recombination. Horizontal radiation could account for much which now passes as evidence for the theory of evolution. The gaps in the geological record are gaps because vertical progress takes place only by creation." (Ramm, B.L., 1954, "The Christian View of Science and Scripture," Paternoster: London, Reprinted, 1960, p.191. Emphasis original).

although Ramm does not actually say it was by creation ex nihilo. I call this position, that the first member of each major kind mentioned in Genesis 1, i.e. of plants, animals and man, was progressively created ex nihilo, Progressive Fiat Creation (PFC), to distinguish it from PMC. However, on reflection this is a misnomer, because PMC also accepts that creation of each major kind was by divine fiat, but not that it was ex nihilo. A better name for PFC would therefore be Progressive Immediate Creation (PIC).

PMC maintains that God created everything mediately (i.e. not ex nihilo) after the original immediate creation of the raw materials in Genesis 1:1, with the possible exception of the infusion of man's soul. That is, according to PMC, God created by modifying existing materials, working (naturally and supernaturally) through natural processes. A corollary of this is that PMC accepts Universal Common Ancestry.

Comments are welcome but as per my Policies on this blog's sidebar, those I consider off-topic (i.e. don't explicitly relate to my post they are under), offensive or sub-standard will not appear.

To be continued with, 1.2. What is Evolution?

Stephen E. Jones, BSc. (Biology).
My other blogs: The Shroud of Turin & Jesus is Jehovah! (inactive)