Re: Daniel's 70 weeks: interpretation of the Hebrew word for `Weeks'

Thank you for your message. As per my stated policy about 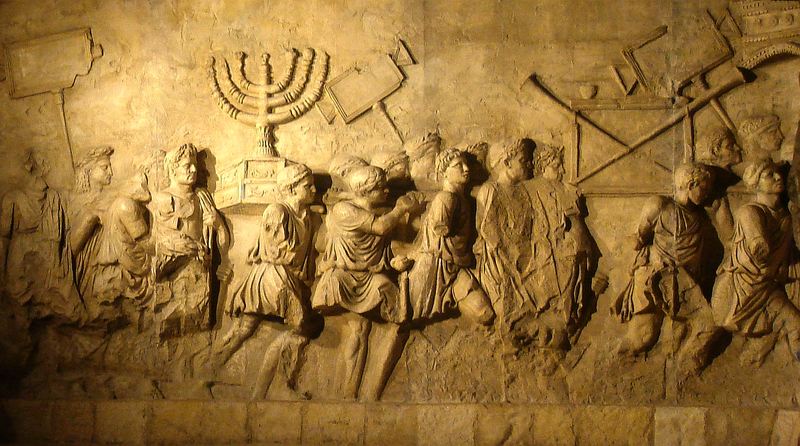 [Above (click to enlarge): The victory spoils from the sack of Jerusalem in AD 70, Arch of Titus, Rome: Wikipedia. Most Christian commentators have interpreted (as I do):

"The people of the ruler who will come will destroy the city and the sanctuary" (Dn 9:26)

as a prediction by Daniel in 539/538 BC of this destruction of Jerusalem and its temple by a Roman army led by Titus Vespasian in AD 70. And therefore Daniel's prophecy of the seventy weeks was completely fulfilled by AD 70.]

when I receive a private message on a topic covered by one of my blogs, I will respond to your message via my CED blog, after removing your personal identifying information. Your words are bold to distinguish them from my response. Also, since you have used red to emphasis some of your words below, I will use green to emphasise some of mine.

>I've looked at your blog every now and then over the years. Recently I was sent a version of Daniel's 70 weeks (Dan 9:24-27) by a friend that I had never heard before.

I haven't mentioned it before, but since October 2008 I have been working steadily on a book on Daniel's prophecy of the seventy weeks. The first part of the book, is an exegesis of every Hebrew word in Dan 9:24-27. Currently I am almost at the end of verse 27, but I am going to go back to verse 24 again to re-check my exegesis in the light of the "Brown-Driver-Briggs Hebrew English Lexicon" (1996), which I have only had since December.

As this post shows, it is essential to first find out what the words of this prophecy actually say , before attempting to interpret and apply the prophecy to historical persons, events and times.

>I have never really been drawn to this particular prophecy as all of the interpretations never felt quite right, so I ignored it.

Presumably that includes my interpretation? You don't say what interpretations of Daniel's seventy weeks you have considered and what your criteria for an interpretation being "quite right" is. Although from what you say below about a "very timely prophecy," I assume you think that the fulfillment of Daniel's prophecy should be in the near future?

>Until now. Anyway, now the light bulb is on. If it's not too much trouble could I get you to take a quick look at it. I would like your opinion
>
>I believe they are a Messianic Church out of OK http://www.danielstimeline.com/danielstimeline.html

Thanks for the link. I read the interpretation there, but there is too much to respond to. So I will only respond to that part of it mentioned in your words about it below.

>Of most interest to me is the interpretation of the Hebraic word for "Weeks" or Shavuot.

According to my four Hebrew lexicons, the website is simply wrong in its central claim that "the Hebrew word Shabuwa" means "a period of Seven and also Feast of Weeks":

The word weeks was translated from the Hebrew word Shabuwa meaning a period of Seven and also Feast of Weeks, one of the seven Feasts of the Lord:

In the original Hebrew, Shabuwa is in plural form; meaning FeastS of Weeks rather than only one Feast of Weeks. This verse reads: "Seventy Shabuwas or Shavuots are determined." (Daniel's Timeline Report, 19 November 2007).

The fundamental error above is the ignoring (or not even realising) that Strong's Concordance does not give the meaning of every Biblical Hebrew, Aramaic or Greek word, but only of every root word:

The concordance itself, at least in its modern version I have, must share most of the blame for not making it very clear that it's claim to "index... every word" (e.g. on its rear cover) only applies to every English word in the KJV Bible (or other English translation), not every Hebrew, Aramaic or Greek word underlying those English words.

Thus my Strong's concordance book has the following listing under "week," all of which have the same number 7620 ("w" is "weeks" abbreviated below and some ending words are truncated):

And in the "Hebrew and Aramaic Dictionary" section at the back it has the following explanation of Strong's number 7620:

Also, I have my Hebrew Bible open in front of me and the word in Dan 9:24 which is translated `weeks' by most English Bibles is (from right to left) shabu`im. And shabu`im is, according to my Davidson's "Analytical Hebrew and Chaldee Lexicon," the "noun masc pl" of "shabu`a," which in turn means "seven":

and his lexicon also has "the feast of weeks" as being two different Heb. words, hag shabu`ot:

The "Theological Wordbook of the Old Testament" (TWOT) also says that "the Feast of Weeks" is the two different words, hag shabu`ot, and the latter is the same word as the above website's "shavuot" but transliterated slightly differently:

The TWOT also states that in Dan 9:24-27, "shabu'a ... denotes a period of seven years in each of its appearances in these four verses" :

Tregelles' "Gesenius' Hebrew and Chaldee Lexicon to the Old Testament Scriptures" also distinguishes between "hag shabu`oth the feast of (seven) weeks" and "shabu`im .. a hebdomad of years, Dan. 9:24":

So that Messianic Jewish website's interpretation fails at the most basic level, that of the actual Hebrew word(s) translated "week(s)" in Dn 9:24-27, namely, shabu`a (singular) and shabu`im (plural). These, in their unusual masculine gender form mean "`weeks' of years" or "heptads of years":

"The prophecy of the Seventy Weeks ... Here we simply point out that the term `weeks' (rendered in NIV as `sevens') is sabu'im, from sabua`, which always takes a feminine plural, sebu'ot, when it means a seven of days, namely, a `week.' The masculine plural here probably indicates that the word is meant as a heptad ... of years." (Archer, G.L., 1985, "Daniel," in Gaebelein, F.E., ed., "The Expositor's Bible Commentary: Daniel and the Minor Prophets," Zondervan: Grand Rapids MI, Vol. 7, p.26. Emphasis original).

They do not mean "the Feast of Weeks" which is two different words, hag shabu`oth."

>From my knowledge, it has always been translated as a seven day period of time and not as " The Feast of Weeks". That change makes this a very different and very timely prophecy.

See above. I assume you mean "seven year period of time" That "the Hebraic word for `Weeks'" in Dan 9:24-27, shabu`im (plural) and shabu`a (singular), "has always" (or at least mostly) "been translated as a seven" year "period of time" is because that is what they mean!

Preferring an interpretation merely because it is "timely," i.e. applies to the near future, may make it seem more interesting to this current generation, but it is an irrelevant criteria for discovering to what period the prophecy actually applies to.

You're welcome. I hope this has been of some help.

shabua`. A period of seven, a week, the Feast of Weeks. This term occurs twenty times in the or, always indicating a period of seven. Indeed, the word obviously comes to us from sheba' (q.v.) and could literally be translated always as `seven-period.' In Deut 16:9, shabu'a represents a period of seven days (literally `seven seven-periods you-shall-number-to-you'). The context in verses 9, 10, and 16 demands the time to be in terms of `days.' No serious expositor has ever argued for `years' here. It might be noted that in Deut 16:9 in the spelling of the plural, the central vowel letter-the waw-is omitted (shabu`ot), as it is also at times in the singular (e.g. Gen 29:27, shebua`) where in an unpointed text it would then be spelled identically to seven, sheba', in the feminine. While in Deut 16:9, discussed above, shabu'a represents a period of seven days, in Dan 9:24,25,26,27 it denotes a period of seven years in each of its appearances in these four verses. ... shabua` is also used as a technical term in Deut 16:10,16 where it denotes the Feast of Weeks (hag shabu`ot), i.e. the Feast of Seven-Periods. American Jewry often still call this feast `Shavuos,' but today's Israeli pronunciation is `Shavuot'. It was so named because it was to be celebrated `on the morrow after' the seventh sabbath after the day of firstfruits (Lev 23:15-16)! Hence it was the feast of the day following the seven seven-periods, or the feast of Hamishim Yom, fifty days-'Pentecost' from the Greek. This feast marked the early wheat harvest at about the sixth of Sivan, at the end of our own month of May. Christians remember Pentecost as the day when the Holy Spirit was poured out in fullness (Acts 2). As Christ was the `firstfruits' (I Cor 15:20,23), many also see in this later Feast of Weeks, shabua`, a picture of the coming resurrection of all the redeemed." (Harris, R.L., Archer, G.L. & Waltke, B.K., eds, 1980, "Theological Wordbook of the Old Testament," Moody Press: Chicago IL, Twelfth Printing, 1992, Vol. II, p.899. My transliteration).