This is my main Bibliography page of my book outline, "Problems of Evolution."

[Left: The late Gerald A. Kerkut (1927-2004), Professor of Physiology and Biochemistry at the University of Southampton. See also PS below.]

I will add Bibliography pages for the first letter of each author's surname, as required and hyperlink them to this main page via the "Author's surnames: A, B, C, ... Z" below.

PS: Kerkut was one of those rare evolutionists who had the scientific objectivity, honesty and bravery to admit of "the `General Theory of Evolution'," i.e. "the theory that all the living forms in the world have arisen from a single source which itself came from an inorganic form," that "the evidence that supports it is not sufficiently strong to allow us to consider it as anything more than a working hypothesis" (see `tagline' quote below; my emphasis)! Although Kerkut does not have "fully naturalistically" in this definition, it is implied in, "not by dogmatic assertions that the General Theory of Evolution must be correct because there is nothing else that will satisfactorily take its place." (my emphasis). Also, in his earlier discussion of "The first assumption is that non-living things gave rise to living material," i.e. the origin of life, Kerkut calls it "spontaneous generation" and asks, "Is it possible for nonliving material simply to be turned into living material or is some extra `vital' force necessary?" (pp.6-7. My emphasis).

"There is a theory which states that many living animals can be observed over the course of time to undergo changes so that new species are formed. This can be called the `Special Theory of Evolution' and can be demonstrated in certain cases by experiments. On the other hand there is the theory that all the living forms in the world have arisen from a single source which itself came from an inorganic form. This theory can be called the `General Theory of Evolution' and the evidence that supports it is not sufficiently strong to allow us to consider it as anything more than a working hypothesis. It is not clear whether the changes that bring about speciation are of the same nature as those that brought about the development of new phyla. The answer will be found by future experimental work and not by dogmatic assertions that the General Theory of Evolution must be correct because there is nothing else that will satisfactorily take its place." (Kerkut, G.A., 1960, "Implications of Evolution," in Kerkut, G.A., ed. "International Series of Monographs on Pure and Applied Biology, Division: Zoology," Volume 4, Pergamon Press: New York NY, p.157). 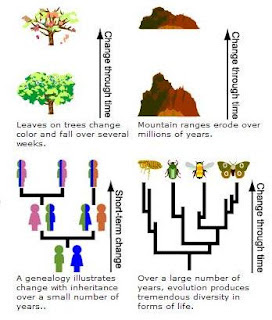 Here are the section headings of Chapter 1., Introduction, of my book outline, "Problems of Evolution."

[Left (click to enlarge): "An introduction to evolution," Understanding Evolution, Berkeley University. Typically fallacious examples of "evolution," as we shall see!]

I will try (time permitting) to write brief notes under at least one section every day.

PS: See `tagline' quote below for the definitive (albeit unfalsifiable and question-begging) definition of "evolution" by the late Harvard evolutionary biology Professor Ernst Mayr (1904-2005) in his book, "What Evolution Is" (my emphasis)! Could it be that the then "world's greatest living evolutionary biologist and a writer of extraordinary insight and clarity," a man of genius IQ (he completed a doctorate of medicine and a doctorate of zoology simultaneously in 3 years by the age of 21!), in 2001, at the age of 97, when he had been a professor of evolutionary biology at Harvard for ~48 years, did not know of an adequate, scientific, definition of what "evolution" is (because there isn't one)?

"Evolution The gradual process by which the living world has been developing following the origin of life." (Mayr, E.W., "What Evolution Is," Basic Books: New York NY, 2001, p.286. Emphasis original)

Posted by Stephen E. Jones at 9:17 PM No comments:

Off-topic: Norton Antivirus froze my computer so I switched to AVG Free 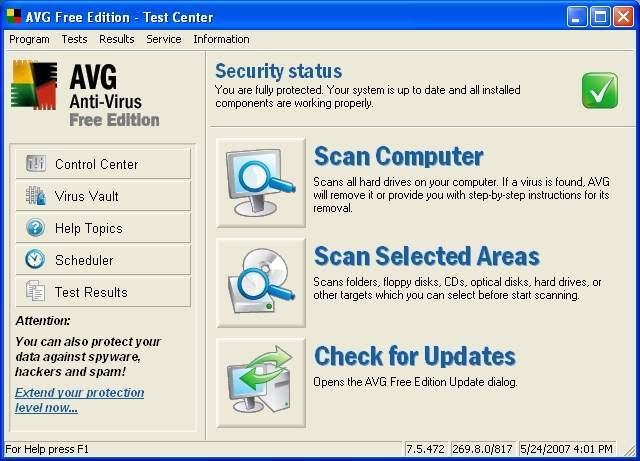 `freezing,' forcing me `hard-boot' it, i.e. to turn it off at the switch and then turn it on again. I could use the computer, but if I left it for a short time, when I came back I found it was `frozen'. It was as though the computer would not `wake up' from sleep mode, with the screen turned off, and not responding to the mouse or keyboard.

After a couple of hard-boots, with the same problem recurring, I decided to go into Control Panel: Power Options and set System standby and Turn off monitor to Never. But even then, when I came back after a short time from using it, I found the computer again frozen, unresponsive to the mouse or keyboard, but this time with the screen turned on and applications running.

I rang the company that I bought the computer from a couple of years ago and described the problem to a technical support person. He said right away that the cause of the problem was probably either: 1) Norton Antivirus, 2) a faulty power supply; or 3) a faulty motherboard, in that order. Then I remembered that Norton Antivirus had that morning updated itself and that the first time my computer froze was while it was running a Norton Antivirus full-system scan. So I removed Norton Antivirus in Control Panel: Add or Remove Programs and for good measure downloaded and ran the Norton Removal Tool.

I already had a copy of AVG Anti-Virus Free Edition on my laptop (which I had installed earlier in the year when I was having problems with Norton Antivirus update repeatedly saying my copy was not licensed and then deciding, correctly, that it was). I have had no problems with AVG, so I installed it also on my desktop computer and the problem of the computer freezing ceased. So the problem was Norton Antivirus. An added bonus is that Excel spreadsheets now load much faster.

There is however a downside to the free edition of AVG, which is that it does not have all the features of a paid full version. In particular, AVG Free Edition will only do scheduled full system scans, not scheduled quick scans of only key parts of a computer system as Norton Antivirus (and I presume AVG's paid edition) does. However, AVG Free Edition can still do manual scans of selected areas and the scheduled full scans run in the background and can be paused or stopped.

I have decided to share this my experience so that it might help others who have similar problems. I am not claiming that Norton Antivirus has a general problem but just that, after working fine for several years, it suddenly became a problem on my system (although the technical support person was obviously aware of similar problems on other computers). Nor am I claiming that AVG has no problems, although I am not aware of any, and this review of AVG Anti-virus Free Edition, described it as, "the best free anti-virus solution available today":

"AVG Anti-virus Free Edition, by Grisoft, is in our books, the best free anti-virus solution available today. It even out-performs many of the well-known commercial anti-virus packages in terms of effectiveness and ease of use. Its no-nonsense resident shield, low resource usage and thorough scanning engine make AVG Free Edition a must for every home user."

PS: See `tagline' quote below by Christian biologist Dr. R. Gary Chiang that what "Evolution Creation debate" and science and the Shroud of Turin have in common is, that "scientists who have based their faith in Naturalism" (i.e. nature is all there is = there is no supernatural = there is no God) "will never admit to the possibility that the Shroud could have wrapped the body of Christ," i.e. if that entails "a supernatural explanation" since "supernatural explanations are ruled out a priori by those scientists who believe that all of nature must be explained in purely materialistic terms."

"What do science and scientists have to do with the Shroud of Turin, an old piece of cloth which folklore describes as being the very linen that wrapped the body of Jesus as it laid in the tomb over 2000 years ago? According to the Roman Catholic Church, which is the current owner of this cloth, the answer is `Nothing.' Science had its chance; now it is time for scientists to leave the cloth alone. Why has the church placed a moratorium on scientific study of this cloth? Could it be that the church is afraid that modern technology will prove the Shroud a fake, and hence, seriously harm the faith of millions of Shroud believers? That is unlikely. Instead, the church has come to the very same conclusion about scientists that this book is attempting to illustrate - the prejudices of a scientist determine how that scientist interprets the scientific facts, more so than any overwhelming scientific evidence that points to one theory being more valid than another. Authorities in the church realize that science and scientists who have based their faith in Naturalism will never admit to the possibility that the Shroud could have wrapped the body of Christ. To admit to this possibility is to also support the conclusion that this cloth was touched by a God who became a real human being for a very short period of time in earth's history. That would be a supernatural explanation, and supernatural explanations are ruled out a priori by those scientists who believe that all of nature must be explained in purely materialistic terms." (Chiang, R.G., "Science meets Religion: Shroud of Turin," in "Overcoming Prejudice in the Evolution Creation Debate: Developing an integrative approach to Science and Christianity," Doorway Publications: Hamilton ON, Canada, 2004)
Posted by Stephen E. Jones at 9:09 PM 8 comments: