Oh, for the Simple Days of the Big Bang 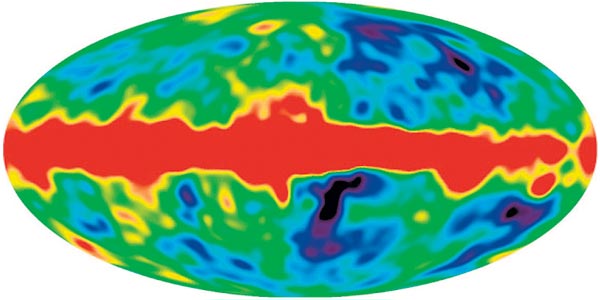 FOURTEEN years ago, when a Berkeley astronomer named George F. Smoot declared that he and his satellite, the Cosmic Background Explorer, or COBE, had detected the astrophysical equivalent of the fingerprints of God, his euphoria was easy to understand. Smoot actually said that "the fluctuations in the background radiation" were "the fingerprints from the Maker" (my emphasis)!:

"Heeren: When the COBE satellite first measured the fluctuations in the background radiation, you made the much publicized statement: "If you're religious, it's like looking at God." [Maugh, T.H., "Relics of 'Big Bang' Seen for First Time," Los Angeles Times, 24 April 1992, pp.A1, A30] Could you explain something about the basic implications of the big bang theory and what you meant by that statement?

Smoot: Well, I meant there were two aspects to it. These were the oldest and largest structures ever seen. Not only did we find what are the seeds of the modern day structure-and that is the galaxies and clusters of galaxies and clusters of clusters of galaxies- but we also found evidence of the birth of the universe, I believe, because I think that if you look at these fluctuations and ask, "How could they have gotten in there?," some of them are so large-that is, they stretch across billions of light-years back at a very early time -that means they hadn't changed-if you move matter and energy around at the speed of light, you can only cross a teeny fraction of them. And so these are primordial-they're in from the moment of creation. And so it's really like looking back at creation and seeing the creation of space and time and the universe and everything in it, but also the imperfections of the creation, sort of the fingerprints from the Maker, if you understand what I mean, or the machining marks from the machine that tooled the universe, and those things very neatly turn out to be the things that caused the universe to be very interesting to us: namely, creating galaxies and stars and so on. So, to me, the implications were really quite profound, the idea that not only do we understand where things came from, but those things were actually like the machining marks, the manufacturing marks, from the creation of the universe.

Heeren: And these had to be very precise-they had to be within very tight boundaries in order to produce anything that made any-to make the right kind of preparations for life.

Smoot: Right. In order to make a universe as big and wonderful as it is, lasting as long as it is-we're talking fifteen billion years and we're talking huge distances here-in order for it to be that big, you have to make it very perfectly. Otherwise, imperfections would mount up and the universe would either collapse on itself or fly apart, and so it's actually quite a precise job. And I don't know if you've had discussions with people about how critical it is that the density of the universe come out so close to the density that decides whether it's going to keep expanding forever or collapse back, but we know it's within one percent."

For a few happy years, one of the last big pieces of the cosmological puzzle seemed to be in place - an explanation why the universe has blossomed into such an interesting place to live. Had it not been for the whorls and dimples Dr. Smoot and his NASA collaborator, John C. Mather, found in the background radiation - the afterimage of the Big Bang - there would be no cosmic scenery. No galaxies or other vast conglomerations of matter, just a smooth expanse of visual nothing. Kansas instead of Colorado. These very "imperfections of the creation" are themselves another fine-tuned parameter of the Universe, without which we would not be here!

Subsequent discoveries have muddled the picture, so much so that last week's announcement that the two men will share a Nobel Prize in physics was almost bittersweet - an occasion to celebrate a pivotal moment in science but also to look back with nostalgia on more innocent times. The creation story supported by the data from the COBE satellite had seemed almost tantalizingly complete. Dr. Smoot's smudges themselves weren't sticky enough to gather particles into globs the size of the Milky Way or the Virgo supercluster. But if you spiked the Big Bang with an invisible additive called dark matter - a clumping factor - and hot-rodded the theory with a brief, early burst of rapid expansion called cosmological inflation, you could get the tiny irregularities in the background radiation to sprawl into something like today's sky. So "dark matter" and "cosmological inflation" are two more fine-tuned parameters of the Universe.

If only it had been that simple. Six years after COBE, another Berkeley scientist, Saul Perlmutter - as well a separate team led by Brian Schmidt of the Mount Stromlo and Siding Spring Observatories in Australia - found something that almost no one had expected. By now, it was assumed, the universe should have settled down, expanding at a steady pace or even slowing, braked by its own gravity. Instead it appeared to be in overdrive, not ballooning as violently as it had in the inflationary era but expanding at a faster and faster rate. Something seemed to be pushing on the accelerator - what has come to be called dark energy, a mysterious kind of anti-gravity. Shoehorning the new ingredient into the prevailing framework has created new Nobel-sized problems. Basic physics predicts that if it exists at all, this repulsive force should be extremely large. Instead, the dark energy is infinitesimal and no one has been able to say why.Therefore this "dark energy" at its "infinitesimal" level is yet another fine-tuned parameter of the Universe!

"Why does the universe look this way rather than some other way? Why does it adhere to these laws of nature rather than to some other laws? Altering any of the universe's fundamental parameters would have radically altered reality. For example, if the cosmos had been slightly more dense at its inception, it would have quickly collapsed into a black hole. A smidgen less dense, and it would have flown apart so fast that there would have been no chance for stars, galaxies, and planets to form. Cosmologists sometimes call this the fine-tuning problem, or, more colorfully, the Goldilocks dilemma: How did the density of the universe turn out not too high, not too low, but just right? The odds that matter would have precisely its observed density, the physicist Lawrence Krauss has calculated, are as great as the odds of guessing precisely how many atoms there are in the sun. Some physicists are so troubled by the arbitrariness of the cosmos that they espouse a quasi-theological concept known as the anthropic principle. According to this notion, the universe must have the structure we observe, because otherwise we wouldn't be here to observe it. The anthropic principle is cosmology's version of creationism." (Horgan, J., "Between Science and Spirituality," The Chronicle of Higher Education, November 29, 2002)

There is no fundamental reason, they say, why the dark energy is so weak. It is just that if it were much stronger, space would have expanded too rapidly to harbor stars and, ultimately, life. The implication is that there is a multitude of possible universes, each with its own physics. Naturally, we are in one where it is possible for us to exist. There is in fact for this degree of "fine-tuning" only "two possible explanations", "Either the Universe was designed specifically for us by a creator or there is a multitude of universes - a `multiverse'":

"But the main reason for believing in an ensemble of universes is that it could explain why the laws governing our Universe appear to be so finely tuned for our existence. In the 1950s, for instance, Fred Hoyle discovered that the step-by-step build-up of heavy elements inside stars depends on a series of spectacular coincidences. Only if the nuclei of beryllium-8, carbon-12 and oxygen-16 exist in particular energy states can hydrogen be built up into the elements of life such as calcium, magnesium and iron. This fine-tuning has two possible explanations. Either the Universe was designed specifically for us by a creator or there is a multitude of universes - a `multiverse'." (Chown, M., "Anything Goes," New Scientist, 6 June 1998, Vol. pp.26-30, p.28).

Note that "the Universe was designed specifically for us by a creator" is here regarded as a scientific explanation.

And as the quote says, "the main reason for believing in an ensemble of universes" is to avoid accepting that "the Universe was designed specifically for us by a creator" (my emphasis)! According to Professor of Mathematical Physics at Cambridge-turned Anglican priest John Polkinghorne, "There is no purely scientific reason to believe in an ensemble of universes" since "these other worlds are" not just unknown but "unknowable by us":

"Let us recognize these speculations for what they are. They are not physics but, in the strictest sense, metaphysics. There is no purely scientific reason to believe in an ensemble of universes. By construction these other worlds are unknowable by us. A possible explanation of equal intellectual respectability - and to my mind greater economy and elegance would be that this one world is the way it is because it is the creation of the will of a Creator who purposes that it should be so." (Polkinghorne, J.C., "One World: The Interaction of Science and Theology," [1986], SPCK: London, 1987, Fourth Impression, p.80).

and an "explanation of equal intellectual respectability" and "greater economy and elegance" is "that this one world is the way it is because it is the creation of the will of a Creator who purposes that it should be so" (my emphasis)!

Stephen E. Jones, BSc (Biol).
Genesis 6:11-13. 11Now the earth was corrupt in God's sight and was full of violence. 12God saw how corrupt the earth had become, for all the people on earth had corrupted their ways. 13So God said to Noah, "I am going to put an end to all people, for the earth is filled with violence because of them. I am surely going to destroy both them and the earth.