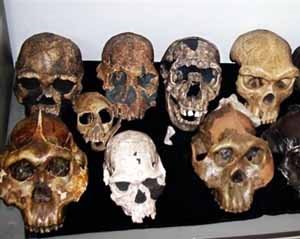 [Graphic: Hominid fossils from the National Museum of Kenya, COSMOS]

Nairobi - The global debate between scientists and conservative Christians over evolution has hit Kenya, where an exhibit of one of the world's finest collections of early hominid fossils is under threat. As the famed National Museum of Kenya (NMK) prepares to re-open next year after massive EU- funded renovations, evangelicals are demanding the display be removed or at least shunted to a less prominent location. The Origins Of Man exhibit, comprised of pre-historic finds from around Africa's Great Rift Valley considered by many to be the cradle of humanity, is offensive as it promotes Charles Darwin's theory of evolution, they say. 'The church is being ridiculous' "When museums put it out there that man evolved from apes, theologically they are affecting many people who are Christians, who believe God created us," says Bishop Boniface Adoyo, who is leading a campaign against the exhibit. "It's creating a big weapon against Christians that's killing our faith," he told AFP, calling evolution theory an "insult" and dangerous to youths. "When children go to museums they'll start believing we evolved from these apes. See also The Guardian. While I don't agree with banning evolution, if that happens in Kenya, where there is a powerful conservative evangelical church, then Darwinists have only themselves to blame for fallaciously claiming that common ancestry = evolution = "God had no part in this process":

After all, Darwinists fundamentalists like Dawkins have indicated that if they were in power, they would not "allow parents to teach their children to believe ... in the literal truth of the Bible":

"Dawkins the dogmatist," Prospect, October 2006, Andrew Brown ... The God Delusion by Richard Dawkins ...One might argue that a professor of the public understanding of science has no need to concern himself with trivialities outside his field like the French revolution, the Spanish civil war or Stalin's purges when he knows that history is on his side. "With notable exceptions, such as the Afghan Taliban and the American Christian equivalent, most people play lip service to the same broad liberal consensus of ethical principles." Really? "The majority of us don't cause needless suffering; we believe in free speech and protect it even if we disagree with what is being said." Do the Chinese believe in free speech? Does Dawkins think that pious Catholics or Muslims are allowed to? Does he believe in it himself? He quotes later in the book approvingly and at length a speech by his friend Nicholas Humphrey which argued that, "We should no more allow parents to teach their children to believe, for example, in the literal truth of the Bible or that planets rule their lives, than we should allow parents to knock their children's teeth out." But of course, it's not interfering with free speech when atheists do it. ..

and that is in their homes. So they really cannot complain if their Christian fundamentalist counterparts get into power in Africa and ban evolution being taught in museums! In fact, Darwinists in Western countries have banned all forms of creation in museums and schools for decades!

As Australian zoologist David J. Young pointed out, "the growth of the creationist movement has been fuelled by a sense of outrage at the way atheist beliefs and secular values are often presented as if they were part of biological science" and "if someone says `my science shows that your religion is bunk', the natural reaction is `well then there must be something wrong with your science'":

"There is an additional factor that needs to be taken into account here. The recent growth in the creationist movement has been matched by an increase in the number of popular science books on evolution, often written by authors who are openly hostile to religion. Some indeed have used their account of evolution to build an atheistic worldview at odds with any concept of creation or providence.Stephen Jay Gould, for example, has done this in his well-known books and essays (e.g. Wonderful Life, Dinosaur in a Haystack). He makes it clear that he believes humans are merely an accidental outcome of evolutionary history, the product of an uncaring Universe and not in any way created in God?s image. This view is not put forward as a personal opinion but is presented as a definite conclusion that science compels us to accept. It may seem like a small point but Gould, in the name of science, is dismissing a concept that is central to the Jewish and Christian religions. Small wonder, then, that the creationists rise up in protest. For the growth of the creationist movement has been fuelled by a sense of outrage at the way atheist beliefs and secular values are often presented as if they were part of biological science. To put it in the vernacular: if someone says `my science shows that your religion is bunk', the natural reaction is `well then there must be something wrong with your science.'" (Young, D.J., "The Evolution of Creationism," Australasian Science, Vol. 23, No. 3, April 2002, pp.20-21).

Stephen E. Jones, BSc (Biol).
Genesis 4:13-16. 13Cain said to the LORD, "My punishment is more than I can bear. 14Today you are driving me from the land, and I will be hidden from your presence; I will be a restless wanderer on the earth, and whoever finds me will kill me." 15But the LORD said to him, "Not so; if anyone kills Cain, he will suffer vengeance seven times over." Then the LORD put a mark on Cain so that no one who found him would kill him. 16So Cain went out from the LORD's presence and lived in the land of Nod, east of Eden.