Dawkins on "'the greatest idea ever to occur to a human mind"! #1 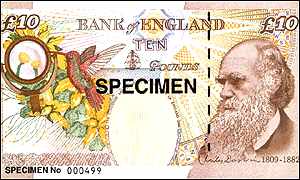 Notes from a small island: Charles Darwin's voyage to the Galapagos, The Independent, 20 October 2006 ...

The image of the old man on the £10 note is misleading. When Charles Darwin boarded 'HMS Beagle' in 1836 and made his now celebrated journey to the Galapagos, he was just 22 years old Actually Darwin first boarded HMS Beagle in 1831 and his voyage on it ended in 1836.

Richard Dawkins explains why he matters more than ever. And, overleaf, we publish extracts from the journals that transformed the way the world thinks about its origins Darwinists are always saying this sort of thing, but it is just propaganda. The fact is that most of "the world" does not "think... about its origins" the same materialistic/naturalistic (matter is all there is/nature is all there is) way that Darwin and Darwinists like Dawkins think about it. What Darwin and Darwinists "think... about ... origins" is that all life, including man "evolved without guidance from God," but in the USA, for example, as a recent Gallup poll confirmed yet again, "Since 1982, when the poll first began" only "between 9 and 13 percent" of all Americans have ever "believed man evolved without guidance from God":

"In a May 8-11 survey of American beliefs on evolution, 46 percent of respondents agreed with the statement: God created human beings pretty much in their present form at one time within the last 10,000 years or so. In comparison, only 13 percent chose the answer: `Human beings have developed over millions of years from less advanced forms of life, but God had no part in this process.' According to the poll results, which were released Monday, the biggest factor in determining the answer was religion. Almost two-thirds of Americans who attend church at least once a week believe that humans were created in their present form, compared to 29 percent of those who say they never attend church. Analysts also found a strong correlation between the level of education and the response. About three-quarters of those with a post-graduate degree said humans developed over millions of years from less advanced forms of life, compared to just 22 percent choosing the `created in present form' option. According to Gallup, the poll shows that Americans? view on the origin of life has remained constant for decades. Since 1982, when the poll first began, between 44 and 47 percent of Americans have consistently agreed with the option that God created humans in their present form, and between 9 and 13 percent believed man evolved without guidance from God. This was the seventh time the poll was conducted. Meanwhile, 36 percent of Americans agreed with a third option, that man evolved with the guidance of God through millions of years. Results are based on telephone interviews with 2,002 national adults from Nov. 7-10, 2004, and May 8-11, 2006. The margin of sampling error is 2 percentage points with 95 percent confidence." (Spencer, E., "Nearly Half of Americans Believe in Creationism," The Christian Post, August 31, 2006).

Charles Darwin is surely one of the most admirable men that ever lived. This is simply false. Darwin was demonstrably dishonest when it came to seeking for himself "the bauble fame." As the late Arnold C. Brackman (amongst others) have pointed out, "Darwin furtively stole from" Edward Blyth, in that Darwin "made unacknowledged use of Blyth's work" (and others), including "a wealth of examples from nature" which "afterwards appear repeated, or indeed copied, by Darwin in his preliminary essays of 1842 and 1844" and then appear disguised in Darwin's Origin of Species (and that is just for starters):

"Despite his religious beliefs, Blyth was a man of ideas, and Darwin furtively stole from him. Two eminent scholars provide the evidence. Loren Eiseley, the late anthropologist, in a lengthy paper for the American Philosophical Society, cited what he described as `startling' evidence for this theft: `namely, that Darwin made unacknowledged use of Blyth's work ... that Blyth is more than a Darwinian precursor, that he is instead a direct intellectual forebear, in a phylogenetic line of descent.' [Eiseley, L.C., "Charles Darwin, Edward Blyth, and the Theory of Natural Selection," in "Darwin and the Mysterious Mr. X," E.P. Dutton: New York NY, 1979, p.59] Eiseley was gentle. Oxford scholar C.D. Darlington was direct and brutal. Darlington noted that, in his early papers, Blyth quoted a wealth of examples from nature to make a point and that `these afterwards appear repeated, or indeed copied, by Darwin in his preliminary essays of 1842 and 1844.'" [Darlington, C.D., "Darwin's Place in History," Basil Blackwell: Oxford UK, 1959, pp.34-35]" (Brackman, A.C., "A Delicate Arrangement: The Strange Case of Charles Darwin and Alfred Russel Wallace," Times Books: New York NY, 1980, pp.37-38).

The idea that he launched upon the world in 1859 is a prime candidate for the title of the greatest idea ever to occur to a human mind. Even if that were true, the point is that Darwin's was not the first "human mind" to which occurred the "idea" of the natural selection of chance variations. Apart from Blyth, who Darwin more immediately stole that "idea" from without acknowledgment, the fact is, as paleontologist H.F. Osborn documented, that "idea" had first occurred to the ancient Greek philosopher Empedocles (c. 490-430 BC) who wrote of "trials of Nature ... improving as time went on" through those "which were unfit to live, and hence eliminated, until, after ceaseless trials, Nature produced the fit and perpetual tribes":

"Empedocles imagined that after these unnatural products became extinct, other forms arose which were able to support themselves and multiply; but even these were not formed at once. First came shapeless masses built of earth and water, or earth slime, without limbs, organs of reproduction, or speech, thrown from fires beneath the earth. Later came the separation of the two sexes and the existing mode of reproduction. These trials of Nature were not a succession of organisms, improving as time went on, but a series of direct births from Nature, which were unfit to live, and hence eliminated, until, after ceaseless trials, Nature produced the fit and perpetual tribes. Thus, in the ancient teachings of Empedocles, we find the germ of the theory of the Survival of the Fittest, or of Natural Selection. And the absolute proof that Empedocles' crude hypothesis embodied this world famous thought, is found in passages in Aristotle's Physics, in which he refers to Empedocles as having first shown the possibility of the origin of the fittest forms of life through chance rather than through Design." (Osborn, H.F., "From the Greeks to Darwin: An Outline of the Development of the Evolution Idea," [1894], Charles Scribner's Sons: New York NY, 1924, reprint, pp.39-40).

Then the Roman poet Lucretius (c. 94-49 BC) who "had himself learnt from the fourth-century Greek Epicurus, who was here in his turn drawing on such fifth-century sources as Empedocles" who had "introduce[d] into a biological context the ideas either of natural selection or of a struggle for existence"wrote of "many species of animals must have perished at that time, unable by procreation to forge out the chain of posterity; for whatever you see" now alive "either cunning or courage or at least quickness must have kept ... from its earliest existence":

"Nor was Darwin the first to introduce into a biological context the ideas either of natural selection or of a struggle for existence. Both can be found in the Roman poet Lucretius in the first century B.C., in an account of how in the beginning our mother earth produced both all the kinds of living things which we now know, and many other sorts of ill-starred monstrosity. But with these latter: `... it was all in vain they could not attain the desired flower of age nor find food nor join by the ways of Venus ... And many species of animals must have perished at that time, unable by procreation to forge out the chain of posterity; for whatever you see feeding on the breath of life, either cunning or courage or at least quickness must have kept ... from its earliest existence." ([Lucretius, "de Rerum Natura," Heineman: London,] V. pp. 845-8 & 855-9) Lucretius, too, was a disciple, clothing in Latin verse ideas which he had himself learnt from the fourth-century Greek Epicurus, who was here in his turn drawing on such fifth-century sources as Empedocles of Acragas (Kirk and Raven, ["The Pre-Socratic Philosophers," CUP: Cambridge, 1957], pp. 336-40). " (Flew, A.G.N., "Darwinian Evolution," Paladin: London, 1984, pp.12-13).

Leading Neo-Darwinist geneticist J.B.S. Haldane called this statement of "the principle of natural selection" "a magnificent intellectual discovery when Lucretius made it two thousand years ago" (my emphasis):

"Lucretius stated the principle of natural selection in its crudest form when he wrote: `And many lines of organisms must have perished then, and been unable to propagate their kind. For whatever you see feeding on the vital air, either craft, strength, or finally mobility has been protecting and preserving that race from its earliest times.'] This was a magnificent intellectual discovery when Lucretius made it two thousand years ago. But it is only a small part of the whole story." (Haldane, J.B.S., "The Causes of Evolution," [1990], Princeton University Press: Princeton NJ, 1993, Second Printing, pp.60-61)

Stephen E. Jones, BSc (Biol).
Genesis 6:14-22. 14So make yourself an ark of cypress wood; make rooms in it and coat it with pitch inside and out. 15This is how you are to build it: The ark is to be 450 feet long, 75 feet wide and 45 feet high. 16Make a roof for it and finish the ark to within 18 inches of the top. Put a door in the side of the ark and make lower, middle and upper decks. 17I am going to bring floodwaters on the earth to destroy all life under the heavens, every creature that has the breath of life in it. Everything on earth will perish. 18But I will establish my covenant with you, and you will enter the ark-you and your sons and your wife and your sons' wives with you. 19You are to bring into the ark two of all living creatures, male and female, to keep them alive with you. 20Two of every kind of bird, of every kind of animal and of every kind of creature that moves along the ground will come to you to be kept alive. 21You are to take every kind of food that is to be eaten and store it away as food for you and for them." 22Noah did everything just as God commanded him.