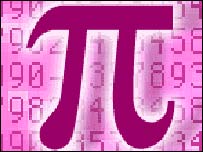 High school student recites 8,784 digits of pi: Math memorization feat likely to land teen on world ranking list, MSNBC/AP, March 17, 2006 SALEM, Va. - A high school student Tuesday recited 8,784 digits of pi - the non-repeating and non-terminating decimal - likely placing him among the top Pi-reciters in the world. Gaurav Rajav, 15, had hoped to recite 10,790 digits and set a new record in the United States and North America. But he remembered enough to potentially place third in national and North American pi recitation and 12th in the world. His ranking should be verified by the Pi World Ranking List within two months. "I'm kind of disappointed, but I guess I did OK," said Gaurav, a junior at Salem High School. But his mathematical feat won the praise of others, including the math and computer science teacher who got Gaurav interested in it. "I'm still stunned," said Linda Gooding, one of three contest judges. She then joked, "That's a couple more than I can do." Gaurav began memorizing pi while a student in Gooding's class. Gooding holds the competition every year, and said she expected students to learn about 40 digits. Gaurav recited nearly 2,990 the first time. ... He will try for the record again in May. ... ... [Darwinists are fond of comparing the highest mental feats of animals with the lowest of humans and then declaring that this is evidence that man is just another ape cobbled together by `the blind watchmaker.' So I have been collecting the highest mental feats of humans for my "Problems of Evolution" book outline, under a section PE 14.1.1.2 "Man Uniqueness ... Intelligence ... Mental feats."

I was about to add this to that section, even though it says memorising 8,784 digits of pi is not the world record, nor is it even the USA record, which is 10,790 digits. So I thought I should check out what was the world record memorisation of Pi, thinking it would be something slightly above the USA record. Well, it is nearly eight times the USA record, 83,431 decimal places, held by a Akira Haraguchi of Japan:

Japanese breaks pi memory record, BBC, 2 July, 2005 ... Pi The symbol used for pi is a letter from the Greek alphabet A Japanese mental health counsellor has broken the world record for reciting pi, the ratio of the circumference of a circle to its diameter, from memory. Akira Haraguchi, 59, managed to recite the number's first 83,431 decimal places, almost doubling the previous record held by another Japanese. He had to stop three hours into his recital after losing his place, and had to start from the beginning. Pi is an infinite decimal whose numbers never repeat in a pattern. Mr Haraguchi, from Chiba, east of Tokyo, took several hours reciting the numbers, finishing in the early hours of Saturday. "I thank you all for your support," he told reporters and onlookers at the public hall in Tokyo. He hopes to be listed in the Guinness Book of World Records to replace his fellow countryman Hiroyuki Goto, who managed to recite 42,195 numbers as a 21-year-old student in 1995. Mr Haraguchi had already recited the ratio up to about 54,000 digits last September, but was forced to drop the challenge when the facility hosting the event closed for the night. So far, pi has been calculated to 1.24 trillion decimal places with the aid of a supercomputer. Conventionally, 3.14159 is used as pi. ...
Man said to recite pi to 83,431 digits, The Boston Globe, July 2, 2005 ... TOKYO --A Japanese psychiatric counselor has recited pi to 83,431 decimal places from memory, breaking his own personal best of 54,000 digits and setting an unofficial world record, a media report said Saturday. Akira Haraguchi, 59, had begun his attempt to recall the value of pi -- a mathematical value that has an infinite number of decimal places -- at a public hall in Chiba city, east of Tokyo, on Friday morning and appeared to give up by noon after only reaching 16,000 decimal places, the Tokyo Shimbun said on its Web site. But a determined Haraguchi started anew and had broken his old record on Friday evening, about 11 hours after first sitting down to his task, the paper said. He reached the 80,000-digit mark after midnight early Saturday, according to the paper, which had a photo showing Haraguchi with his eyes closed, his face contorted in concentration. If verified and recognized by the Guinness Book of Records, Haraguchi's feat would beat his own previous best -- currently under review -- of 54,000 digits. The official current record-holder, also Japanese, calculated pi from memory to 42,195 decimal places in 1995. Pi, usually given as an abbreviated 3.14, is the ratio of the circumference to the diameter of a circle. The number has fascinated and confounded mathematicians for centuries. Aided by a supercomputer, a University of Tokyo mathematician set the world record for figuring out pi to 1.24 trillion decimal places in 2002. Researchers say that calculating pi to more than about 1,000 decimal places has not much purpose in math or engineering, though mathematicians have done so to test the accuracy and limits of supercomputers. ....

Christian geneticist David Wilcox (who like me accepts common ancestry), nevertheless suggests that the vast mental gulf between man and his nearest living relative, the chimp, warrants the conclusion that "a kingdom level `speciation' event has occurred, the first since the Cambrian":

"If then we are so like the chimp, why are we not crossing bridges built by chimp engineers or singing hymns written by chimp poets? Obviously because the above measures of likeness told us very little about who we are. What we have discovered from these molecular and anatomical studies is apparently a long list of things irrelevant to being human - or to being a chimpanzee. Note that all the above studies are based on comparisons of characteristics described on the lower levels of the blueprint hierarchy. If, as we concluded in the last chapter, such measures can be useful for deducing ancestry, it would be logical to suggest that chimps and humans are descended from a common ancestor (at about 7 MYA). If so, however, it also follows that the nature of that common ancestor is irrelevant to understanding the difference between chimps and humans. ... perhaps a description of how humans differ from other forms of life would be more fruitful.... All primates, but especially hominoids, have manipulative hands and large brains, but not to the extent that the human species does. .... Subtle differences are also to be found in the human airway and tongue, changes which allow for the complex shaping of sounds, (changes which make swallowing and breathing more difficulty. How significant would a extra terrestrial biologist consider these morphological variants? What taxonomic status would he give us? ... By frog standards, human and chimp should belong to different orders. ... it seems clear that, morphologically at least, the human race merits its family level distinction from the apes, despite its molecular similarity. .... Adaptive complexes (as in the panda) are usually considered functions of an ecological niche. Our theoretical extra-terrestrial investigator therefore might also compare the human and chimp niches. He would certainly have no trouble differentiating the human `niche' from the rather narrow arboreal niches and limited habitats of the other hominoids. No species on earth lives in more habitats, uses more resources, has more diverse ecological roles or shows greater societal plasticity. This is despite the fact that as a species, humans are anatomically uniform and reproductively cohesive. ... Thus, man's niche is far less determined by the environment than is the niche of the chimpanzee. Our extra terrestrial friend would probably conclude that the human species has indeed recently penetrated a radically new adaptive plane, one as great as the `invention' of photosynthesis or multicellular life. Perhaps he would conclude that a kingdom level `speciation' event has occurred, the first since the Cambrian." (Wilcox D.L., "Created in Eternity, Unfolded in Time," Eastern College: St. Davids PA, 1990, Unpublished manuscript, Chapter 7, p.3. Emphasis original)

A human mind that can remember and recite in perfect sequence to 83,431 numbers that have no rhyme or reason, taking 11 hours just to say them, supports that conclusion!]

"As possibilities were promoted into probabilities, and probabilities into certainties, so ignorance itself was raised to a position only once removed from certain knowledge. When imagination exhausted itself and Darwin could devise no hypothesis to explain away a difficulty, he resorted to the blanket assurance that we were too ignorant of the ways of nature to know why one event occulted rather than another, and hence ignorant of the explanation that would reconcile the facts to his theory. When one botanist argued that his theory was contradicted by the fact that some forms remained unaltered through long periods of time and wide expanse of space, Darwin admitted the objection to be `formidable in appearance, and to a certain extent in reality.' But this did not deter him: `Does not the difficulty rest much on our silently assuming that we know more than we do? I have literally found nothing so difficult as to try and always remember our ignorance. I am never weary, when walking in any new adjoining district or country, of reflecting how absolutely ignorant we are why certain old plants are not there present, and other new ones are, and others in different proportions.... Certainly a priori we might have anticipated that all the plants anciently introduced into Australia would have undergone some modification; but the fact that they have not been modified does not seem to me a difficulty of weight enough to shake a belief grounded on other arguments.' [Darwin to Bentham, May 22, 1863: Life and Letters, II, 24-25]" (Himmelfarb G., "Darwin and the Darwinian Revolution," [1959], Elephant Paperbacks: Chicago IL, 1996, reprint, pp.335-336)