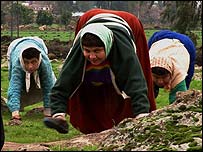 Family may provide evolution clue, BBC, 7 March 2006 ... Five siblings from Turkey who walk on all fours could provide science with an insight into human evolution, researchers have said. The four sisters and one brother could yield clues to why our ancestors made the transition from four-legged to two-legged animals, says a UK expert. But Professor Nicholas Humphrey rejects the idea that there is a "gene" for bipedalism, or upright walking. .... Professor Humphrey ... says that our own species' transition to walking on two feet must have been a more complex process that involved many changes to the skeleton and to the human genetic make-up. However, a German group says a genetic abnormality does seem to be involved in the siblings' gait. ... Three of the sisters and one brother have only ever walked on two hands and two feet, but another sister alternates between a bipedal and quadrupedal gait. Another brother walks on two feet all the time, but only with difficulty. ... The siblings ... were born with what looks like a form of brain damage. MRI scans seem to show that they have a form of cerebellar ataxia, which affects balance and coordination. However, scientists are divided on what caused them to revert to quadrupedalism (walking on all fours). The method of locomotion used by the Turkish children and by our closest relatives chimpanzees and gorillas, differs in a crucial way, said Professor Humphrey. While gorillas and chimpanzees walk on their knuckles, the Turkish siblings put their weight on the wrists, lifting their fingers off the ground. ... "What's significant about that is that chimpanzees ruin their fingers walking like that," ... "These kids have kept their fingers very agile, for example, the girls in the family can do crochet and embroidery." He added that calluses pictured on the hands of one family member demonstrated that the behaviour was not a hoax. Professor Humphrey said this could be the way that humankind's direct ancestors walked. Hands which have kept the fingers dextrous would also have been able to manipulate tools, a key development which influenced the evolution of the human body and intelligence. "I think it's possible that what we are seeing in this family is something that does correspond to a time when we didn't walk like chimpanzees but was an important step between coming down from the trees and becoming fully bipedal," the LSE researcher said. 'Infant walking' Professor Humphrey thinks that the brain abnormality simply caused the siblings to rediscover a form of locomotion used by our ancestors. "Because of the peculiar circumstances they were in, they kept walking as infants," he said. But a team led by Stefan Mundlos of the Max Planck Institute in Berlin, Germany, thinks that the genetic abnormality which causes the children's unusual gait may have played a more fundamental role in evolution. Professor Mundlos has located the gene on chromosome 17 and speculates that a gene important in the transition to bipedalism may have been knocked out in the children. ...

[I doubt that this has anything to do with the human transition from quadrupedalims to bipedalism, for the simple reason that chimps, other apes and even monkeys can walk bipedally (although they cannot adopt a striding gait-which is the unique feature of human bipedalism), whereas some members of this unfortunate family cannot walk bipedally at all. That they save their fingers from being ruined by using their wrists (indeed the photo shows one of them at least using shoes on her hands) hardly needs a fancy `evolutionary' explanation!]

MSNBC, Alan Boyle, March 9, 2006 ... Scientists have found evidence that cold, Yellowstone-like geysers of water are issuing from a moon of Saturn called Enceladus, apparently fueled by liquid reservoirs that may lie just tens of yards beneath the moon's icy surface. The surprising discovery, detailed in Friday's issue of the journal Science, could shoot Enceladus to the top of the list in the search for life elsewhere in our solar system. Scientists described it as the most important discovery in planetary science in a quarter-century. "I think this is important enough that we will see a redirection in the planetary exploration program," Carolyn Porco, head of the imaging team for the Cassini mission to Saturn, told MSNBC.com. "We've just brought Enceladus up to the forefront as a major target of astrobiological interest." The readings from Enceladus' geyser plumes indicate that all the prerequisites for life as we know it could exist beneath Enceladus' surface, Porco said. "Living organisms require liquid water and organic materials, and we know we have both on Enceladus now," she said. "The plumes through which Cassini flew last July contain methane, contain CO2, propane - they contain several organic materials." The third necessary ingredient - energy for fueling life's processes - could exist around hydrothermal vents around the bottom of Enceladus' water reservoirs, just as it does around Earth's deep-ocean hydrothermal vents. ... [This continues the delusion (or the wilful misleading of the taxpayer) that if "all the prerequisites for life as we know it ... exist" then life will exist. But a half-century plus of assembling "all the prerequisites for life as we know it" in laboratory experiments has not produced life, or anything even close to it. As the biophysicist Blum pointed out in 1951 (before the 1953 Miller-Urey experiment), that it "no more follows" that "once the proper molecular compounds were there, life would appear" than "that an automobile ... might spring spontaneously from a mixture of all the chemical species from which it is composed":

"The living machine is clearly not just a mixture of chemicals, yet there seems to be widespread belief that, once the proper molecular compounds were there, life would appear, whether on the earth, on Mars, or elsewhere in the universe. This no more follows, I may point out at the risk of being thought overly facetious, than that an automobile, 1962 model, might spring spontaneously from a mixture of all the chemical species from which it is composed. " (Blum H.F., "Time's Arrow and Evolution," [1951], Harper Torchbooks: New York NY, Second Edition, 1955, Revised, 1962, p.178G)

As with an "automobile" what is needed to turn parts into a functioning machine (in this case a "living machine", i.e. a self-replicating Von Neumann machine), is intelligent design! I wonder if astrobiologists despatch a probe to Enceladus specifically to look for signs of life, such that if there was life there it would find it, and there wasn't, would that falsify the `life is just physics and chemistry' scientific materialist paradigm? If not, then in what sense is it falsifiable and therefore science (according to their own demarcation criteria by which they dismiss ID)?]

"Moreover, in estimating the vehemence of the opposition which has been offered, it should be borne in mind that the views defended by religious writers are, or should be, all-important in their eyes. They could not be expected to view with equanimity the destruction in many minds of `theology, natural and revealed, psychology, and metaphysics;' nor to weigh with calm and frigid impartiality arguments which seemed to them to be fraught with results of the highest moment to mankind, and, therefore, imposing on their consciences strenuous opposition as a first duty. Cool judicial impartiality in them would have been a sign perhaps of intellectual power, but also of a grievous deficiency of generous emotion. It is easy to complain of onesidedness in the views of many who oppose Darwinism in the interest of orthodoxy; but not at all less patent is the intolerance and narrow-mindedness of some of those who advocate it, avowedly or covertly, in the interest of heterodoxy." (Mivart S.J., "On the Genesis of Species," Macmillan & Co: London & New York, Second edition, 1871, p.16)
Posted by Stephen E. Jones at 9:47 AM