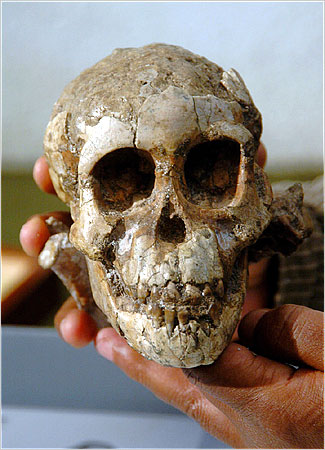 The 3.3-million- year-old fossilised remains of a human-like child have been unearthed in Ethiopia's Dikika region. The female Australopithecus afarensis bones are from the same species as an adult skeleton found in 1974 which was nicknamed "Lucy". Scientists are thrilled with the find, reported in the journal Nature. ... See also ABC/Reuters, Livescience, New York Times, The Australian, The Independent and Washington Post.

The abstract of the Nature article seems to be saying that bones present in this Dikika girl fossil, which are missing in Lucy, indicate that A. afarensis may have been more ape-like than was previously thought:

"The find includes many previously unknown skeletal elements from the Pliocene hominin record, including a hyoid bone that has a typical African ape morphology. The foot and other evidence from the lower limb provide clear evidence for bipedal locomotion, but the gorilla-like scapula and long and curved manual phalanges raise new questions about the importance of arboreal behaviour in the A. afarensis locomotor repertoire." (Alemseged, Z., et al., "A juvenile early hominin skeleton from Dikika, Ethiopia," Nature, Vol. 443, 21 September 2006, pp.296-301).

When the hype that surrounds every hominid discovery subsides, I would not be surprised if the gap between the two genera, Australopithecus and Homo has widened, not narrowed!

It is a real (if not insoluble) problem in Human Evolution why a forest ape would even begin "a fundamental reconstruction of" its "anatomy, particularly of the foot and pelvis" which "Moreover ... represents an anatomical reconstruction outside the general pattern of human evolution" (my emphasis):

"I believe that we must reassess fundamentally the relative importance we have assigned to upright posture and increase in brain size as determinants of human evolution. We have viewed upright posture as an easily accomplished, gradual trend and increase in brain size as a surprisingly rapid discontinuity- something special both in its evolutionary mode and the magnitude of its effect. I wish to suggest a diametrically opposite view. Upright posture is the surprise, the difficult event, the rapid and fundamental reconstruction of our anatomy. The subsequent enlargement of our brain is, in anatomical terms, a secondary epiphenomenon, an easy transformation embedded in a general pattern of human evolution. Six million years ago at most, if the molecular clock runs true (and Wilson and Sarich would prefer five), we shared our last common ancestor with gorillas and chimps. Presumably, this creature walked primarily on all fours, although it may have moved about on two legs as well, as apes and many monkeys do today. Little more than a million years later, our ancestors were as bipedal as you or I. This, not later enlargement of the brain, was the great punctuation in human evolution. Bipedalism is no easy accomplishment. It requires a fundamental reconstruction of our anatomy, particularly of the foot and pelvis. Moreover, it represents an anatomical reconstruction outside the general pattern of human evolution. ... But upright posture is a different phenomenon. It cannot be achieved by the `easy' route of retaining a feature already present in juvenile stages. ... It is now two in the morning and I'm finished. I think I'll walk over to the refrigerator and get a beer; then I'll go to sleep. Culture-bound creature that I am, the dream I will have in an hour or so when I'm supine astounds me ever so much more than the stroll I will now perform perpendicular to the floor." (Gould, S.J., "Our Greatest Evolutionary Step," in "The Panda's Thumb: More Reflections in Natural History," [1980], Penguin: London, 1990, reprint, pp.110-111).

The disadvantages of true bipedalism in its earliest incomplete stages are so great, because "so drastic an anatomical rebuilding is required to transform a quadruped into a biped, an animal in which the evolutionary change is still incomplete would be an inefficient biped" (my emphasis):

"Lovejoy is a fine anatomist, a specialist in the mechanics and origin of bipedalism. He decided some years ago to see whether the biological differences between apes and humans may have provided a competitive edge for the development of upright locomotion. His opening premise was very direct: `Hominids became bipeds for some specific biological reason,' he explained recently. `It wasn't for locomotion, because bipedalism is a lousy way of getting around. ...' As bipeds, humans are embarrassingly slow on foot and not particularly agile in the trees. ... Another part of Lovejoy's argument is that, because so drastic an anatomical rebuilding is required to transform a quadruped into a biped, an animal in which the evolutionary change is still incomplete would be an inefficient biped." (Leakey, R. & Lewin, R., "Origins Reconsidered: In Search of What Makes Us Human," [1992], Abacus: London, 1993, reprint, p.87. Emphasis in original)

that "Natural selection ... the blind watchmaker" which "has no purpose in mind. ... has no mind and no mind's eye. ... does not plan for the future. ... has no vision, no foresight, no sight at all":

"Natural selection, the blind, unconscious, automatic process which Darwin discovered, and which we now know is the explanation for the existence and apparently purposeful form of all life, has no purpose in mind. It has no mind and no mind's eye. It does not plan for the future. It has no vision, no foresight, no sight at all. If it can be said to play the role of watchmaker in nature, it is the blind watchmaker." (Dawkins, R., "The Blind Watchmaker: Why the Evidence of Evolution Reveals a Universe Without Design," W.W Norton & Co: New York NY, 1986, p.5)

would prevent it happening, as in fact it has not happened in any other species of mammals, primates, monkeys or apes, except in the line leading to man.

So great was this disadvantage that for decades the dominant paradigm in Human Evolution was the "Savannah Theory" which held that it was strong selection for hunting the vast herds of game on the new dry open grasslands of Africa which caused man's ancestors to leave the trees and become bipedal. But unfortunately, as Richard Leakey noted, "the great plains and the immense herds on them are relatively recent aspects of the African environment, much more recent than the origin of the human family" (my emphasis):

"The images we all have of the great plains of Africa, darkened by huge migrating herds, are indeed dramatic. So powerful are they that we tend to project them into the past, thinking that the landscape must always have been like that. Once again, it is all too easy to allow the power of present images to distort our pictures of the past. There's no doubt that the images of the plains intruded themselves into traditional ideas of human origins: our ancestors striding out onto the open savannah, there to become noble hunters. In fact, the great plains and the immense herds on them are relatively recent aspects of the African environment, much more recent than the origin of the human family." (Leakey, R. & Lewin, R., Ibid., pp.84-85)

However, a far-sighted Watchmaker, such as the Christian God, could "intervene directly to ... inject essential new genetic material at various points in order to facilitate the emergence of new traits and, eventually, new species":

"Suppose contemporary evolutionary theory had blind chance built into it so firmly that there was simply no way of reconciling it with any sort of divine guidance. It would still be perfectly possible for theists to reject that theory of evolution and accept instead a theory according to which natural processes and laws drove most of evolution, but God on occasion abridged those laws and inserted some crucial mutation into the course of events. Even were God to intervene directly to suspend natural law and inject essential new genetic material at various points in order to facilitate the emergence of new traits and, eventually, new species, that miraculous and deliberate divine intervention would by itself leave unchallenged such key theses of evolutionary theory as that all species derive ultimately from some common ancestor. Descent with genetic intervention is still descent-it is just descent with nonnatural elements in the process." (Ratzsch, D.L., "The Battle of Beginnings: Why Neither Side is Winning the Creation-Evolution Debate," InterVarsity Press: Downers Grove IL, 1996, pp.187-188)

in such a way that they would `fall under the radar' of natural selection and not be rejected by it.

My Progressive Mediate Creation theory proposes that that this is in fact what actually happened. So Ernst Mayr was right when he observed that, "It is a miracle that man ever happened" in view of the fact that he "was the result of a sequence of thousands of ... highly improbable steps" (my emphasis)!:

"Looking at the SETI project from a biologist's point of view ... I demonstrate that each step leading to the evolution of intelligent life on earth was highly improbable and that the evolution of the human species was the result of a sequence of thousands of these highly improbable steps. It is a miracle that man ever happened, and it would be an even greater miracle if such a sequence of improbabilities had been repeated anywhere else." (Mayr, E.W., "Toward a New Philosophy of Biology: Observations of an Evolutionist," Harvard University Press: Cambridge MA, 1988, p.5).

The French mathematician Marcel Schutzenberger, even though he was an evolutionist (not a "creationist" as someone in this Wikipedia article falsely claimed), admitted that "Gradualists and saltationists alike are completely incapable of giving a convincing explanation of the quasi-simultaneous emergence of a number of biological systems that distinguish human beings from the higher primates" including "bipedalism" and "The reality is that we" (i.e. evolutionists) "are confronted with total conceptual bankruptcy" (my emphasis):

"Gradualists and saltationists alike are completely incapable of giving a convincing explanation of the quasi-simultaneous emergence of a number of biological systems that distinguish human beings from the higher primates: bipedalism, with the concomitant modification of the pelvis, and, without a doubt, the cerebellum, a much more dexterous hand, with fingerprints conferring an especially fine tactile sense; the modifications of the pharynx which permits phonation; the modification of the central nervous system, notably at the level of the temporal lobes, permitting the specific recognition of speech. From the point of view of embryogenesis, these anatomical systems are completely different from one another. Each modification constitutes a gift, a bequest from a primate family to its descendants. It is astonishing that these gifts should have developed simultaneously. Some biologists speak of a predisposition of the genome. Can anyone actually recover the predisposition, supposing that it actually existed? Was it present in the first of the fish? The reality is that we are confronted with total conceptual bankruptcy." (Schutzenberger, M-P., in "The Miracles of Darwinism: Interview with Marcel-Paul Schutzenberger," Origins & Design, Vol. 17, No. 2, Spring 1996, pp.10-15).

Stephen E. Jones, BSc (Biol).
Genesis 3:8-12. 8Then the man and his wife heard the sound of the LORD God as he was walking in the garden in the cool of the day, and they hid from the LORD God among the trees of the garden. 9But the LORD God called to the man, "Where are you?" 10He answered, "I heard you in the garden, and I was afraid because I was naked; so I hid." 11And he said, "Who told you that you were naked? Have you eaten from the tree that I commanded you not to eat from?" 12The man said, "The woman you put here with me-she gave me some fruit from the tree, and I ate it."