Today I found two other variations of C.S. Lewis' "argument from reason", the term used for (given by?) Christian philosopher Victor Reppert for:

"C.S. Lewis's argument, found in his book Miracles that naturalism is self-refuting because it is inconsistent with the validity of reasoning." (Reppert, V.E., "C.S. Lewis's Dangerous Idea: A Philosophical Defense of Lewis's Argument from Reason," InterVarsity Press: Downers Grove IL, 2003, p.11) 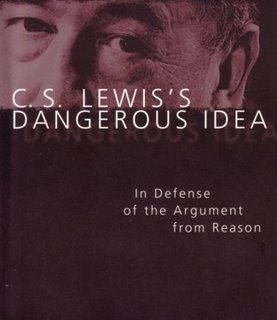 First, here is a quote of Lewis' main argument (which I already knew about)

that not only does "materialism" (i.e. matter is all there is) "refute... itself" but so does "Naturalism" (i.e. nature is all there is) because "It discredits our processes of reasoning or at least reduces their credit to such a humble level that it can no longer support Naturalism itself":

"A theory which explained everything else in the whole universe but which made it impossible to believe that our thinking was valid, would be utterly out of court. For that theory would itself have been reached by thinking, and if thinking is not valid that theory would, of course, be itself demolished. It would have destroyed its own credentials. It would be an argument which proved that no argument was sound-a proof that there are no such things as proofs-which is nonsense. Thus a strict materialism refutes itself for the reason given long ago by Professor Haldane: `If my mental processes are determined wholly by the motions of atoms in my brain, I have no reason to suppose that my beliefs are true ... and hence I have no reason for supposing my brain to be composed of atoms.'" [Haldane, J.B.S., "Possible Worlds," Chatto & Windus: London, 1927, p.209] But Naturalism, even if it is not purely materialistic, seems to me to involve the same difficulty, though in a somewhat less obvious form. It discredits our processes of reasoning or at least reduces their credit to such a humble level that it can no longer support Naturalism itself." (Lewis, C.S., "Miracles: A Preliminary Study," [1947], Fontana: London, Second edition, 1963, reprint, pp.18-19. Ellipses Lewis')

Here are the two other variations of Lewis' argument from reason that I discovered (or rediscovered?) today.

If the mind is in the final analysis nothing but the brain (as both Materialism and Naturalism claim), then "to talk of one bit of matter as being true about another bit of matter" is "nonsense":

"It therefore follows that all knowledge whatever depends on the validity of inference. If, in principle, the feeling of certainty we have when we say `Because A is B therefore C must be D' is an illusion, if it reveals only how our cortex has to work and not how realities external to us must really be, then we can know nothing whatever. ... This admission seems to me completely unavoidable and it has very momentous consequences. In the first place it rules out any materialistic account of thinking. We are compelled to admit between the thoughts of a terrestrial astronomer and the behaviour of matter' several light-years away that particular relation which we call truth. But this relation has no meaning at all if we try to make it exist between the matter of the star and the astronomer's brain, considered as a lump of matter. The brain may be in all sorts of relations to the star no doubt: it is in a spatial relation, and a time relation, and a quantitative relation. But to talk of one bit of matter as being true about another bit of matter seems to me to be nonsense." (Lewis, C.S., "De Futilitate," in "Christian Reflections," [1967], Hooper, W., ed., Fount: Glasgow UK, Fourth Impression, 1988, pp.86-88)

And if the "mind is a product of the irrational" (which materialistic-naturalistic evolution claims it is) then "how shall I trust my mind when it tells me about Evolution?":

"What makes it impossible that it should be true is not so much the lack of evidence for this or that scene in the drama as the fatal self-contradiction which runs right through it. The Myth [of Evolution] cannot even get going without accepting a good deal from the real sciences. And the real sciences cannot be accepted for a moment unless rational inferences are valid: for every science claims to be a series of inferences from observed facts. It is only by such inferences that you can reach your nebulae and protoplasm and dinosaurs and sub-men and cave-men at all. Unless you start by believing that reality in the remotest space and the remotest time rigidly obeys the laws of logic, you can have no ground for believing in any astronomy, any biology, any palaeontology, any archaeology. To reach the positions held by the real scientists- which are then taken over by the Myth-you must, in fact, treat reason as an absolute. But at the same time the Myth asks me to believe that reason is simply the unforeseen and unintended by-product of a mindless process at one stage of its endless and aimless becoming. The content of the Myth thus knocks from under me the only ground on which I could possibly believe the Myth to be true. If my own mind is a product of the irrational - if what seem my clearest reasonings are only the way in which a creature conditioned as I am is bound to feel- how shall I trust my mind when it tells me about Evolution? They say in effect: 'I will prove that what you call a proof is only the result of mental habits which result from heredity which results from bio-chemistry which results from physics.' But this is the same as saying: 'I will prove that proofs are irrational': more succinctly, 'I will prove that there are no proofs': The fact that some people of scientific education cannot by any effort be taught to see the difficulty, confirms one's suspicion that we here touch a radical disease in their whole style of thought. But the man who does see it, is compelled to reject as mythical the cosmology in which most of us were brought up. That it has embedded in it many true particulars I do not doubt: but in its entirety, it simply will not do. Whatever the real universe may turn out to be like, it can't be like that." (Lewis, C.S., "The Funeral of a Great Myth," in "Christian Reflections," [1967], Hooper, W., ed., Fount: Glasgow UK, Fourth Impression, 1988, pp.117-118)

In other words (and here is another quote, this one by another Christian philosopher James. W. Sire), the only way for evolution to be true (i.e. free of Darwin's "horrid doubt") is that our minds had been put together under the direction of an Intelligent Designer!:

"Charles Darwin himself once said, `The horrid doubt always arises whether the convictions of man's mind, which has developed from the mind of the lower animals, are of any value or at all trustworthy. Would anyone trust the conviction of a monkey's mind, if there are any convictions in such a mind?' [Darwin, C.R., Letter to W. Graham, July 3rd, 1881, in Darwin, F., ed., "The Life and Letters of Charles Darwin," [1898], Basic Books: New York NY, Vol. I., 1959, reprint, p.285] In other words, if my brain is no more than that of a superior monkey, I cannot even be sure that my own theory of my origin is to be trusted. Here is a curious case: If Darwin's naturalism is true, there is no way of even establishing its credibility let alone proving it. Confidence in logic is ruled out. Darwin's own theory of human origins must therefore be accepted by an act of faith. One must hold that a brain, a device that came to be through natural selection and chance-sponsored mutations, can actually know a proposition or set of propositions to be true. C.S. Lewis puts the case this way: `If all that exists is Nature, the great mindless interlocking event, if our own deepest convictions are merely the by-products of an irrational process, then clearly there is not the slightest ground for supposing that our sense of fitness and our consequent faith in uniformity tell us anything about a reality external to ourselves.Our convictions are simply a fact about us-like the colour of our hair. If Naturalism is true we have no reason to trust our conviction that Nature is uniform. [Lewis, C.S., "Miracles: A Preliminary Study," [1947], Fontana: London, 1960, Revised Edition, 1963, reprint, p.109] What we need for such certainty is the existence of some `Rational Spirit' outside both ourselves and nature from which our own rationality could derive. Theism assumes such a ground; naturalism does not." (Sire, J.W., "The Universe Next Door: A Basic World View Catalog," [1976], InterVarsity Press: Downers Grove IL, Second Edition, 1988, pp.94-95. Emphasis original)

As Lewis says above, "The fact that some people of scientific education cannot by any effort be taught to see the difficulty, confirms one's suspicion that we here touch a radical disease in their whole style of thought"!

Stephen E. Jones, BSc (Biol).
Genesis 1:7. So God made the expanse and separated the water under the expanse from the water above it. And it was so.