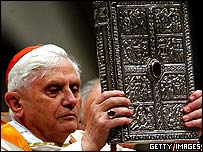 Presumably, Pope Benedict XVI asked his Schülerkreis, the circle of his former doctoral students, to discuss "Creation and Evolution" during the group's annual meeting this month at Castel Gandolfo, Italy, because he wants to consult theologians, philosophers and natural scientists before addressing the subject -- if, indeed, he feels the need to say anything, a point which remains to be seen. [This interesting article is, however, based on a false premise: that Pope Benedict has the realistic option of doing nothing (or even little) about the tide (or tsunami) of scientific materialism- naturalism engulfing his church.

But Benedict is no fool and surely realises that his predecessor Pope John Paul II's 1996 statement that "new knowledge has led to the recognition of the theory of evolution as more than a hypothesis" (Pope John Paul II, "Truth Cannot Contradict Truth," Address to the Pontifical Academy of Sciences, October 22, 1996) has been taken by the scientific materialists (like the late Stephen Jay Gould) to be a capitulation by the Roman Catholic Church to "evolution" as "not merely ... a plausible possibility, but also as an effectively proven fact":

"In the context of this `standard' position, I was enormously puzzled by a statement issued by Pope John Paul II on October 22, 1996, to the Pontifical Academy of Sciences ... In this document, titled `Truth Cannot Contradict Truth,' the Pope defended both the evidence for evolution and the consistency of the theory with Catholic religious doctrine. ... I knew that Pope Plus XII ... had made the primary statement in a 1950 encyclical entitled Humani Generis. I knew the main thrust of his message: Catholics could believe whatever science determined about the evolution of the human body, so long as they accepted that, at some time of his choosing, God had infused the soul into such a creature. ... John Paul begins by summarizing Pius's older encyclical of 1950 ... The novelty and news value of John Paul's statement lies, rather, in his profound revision of Pius's second and rarely quoted claim that evolution, while conceivable in principle and reconcilable with religion, can cite little persuasive evidence in support, and may well be false. John Paul states ... that evolution can no longer be doubted by people of goodwill and keen intellect ... `Today, almost half a century after the publication of the encyclical, new knowledge has led to the recognition of the theory of evolution as more than a hypothesis.' ... In conclusion, Pius had grudgingly admitted evolution as a legitimate hypothesis that he regarded as only tentatively supported and potentially (as he clearly hoped) untrue. John Paul, nearly fifty years later, reaffirms the legitimacy of evolution under the NOMA principle-no news here-but then adds that additional data and theory have placed the factuality of evolution beyond reasonable doubt. Sincere Christians must now accept evolution not merely as a plausible possibility, but also as an effectively proven fact. In other words, official Catholic opinion on evolution has moved from `say it ain't so, but we can deal with it if we have to' (Pius's grudging view of 1950) to John Paul's entirely welcoming `it has been proven true; we always celebrate nature's factuality, and we look forward to interesting discussions of theological implications.' [Gould's words not the Popes']" (Gould, S.J., "Non-Overlapping Magisteria," in "Leonardo's Mountain of Clams and the Diet of Worms: Essays on Natural History", [1998], Vintage: London, 1999, reprint, pp.271-273, 278-280)

But then "evolution" to scientific materialists like Gould means fully naturalistic "evolution," that is "... the standard scientific theory that `human beings have developed over millions of years from less advanced forms of life, but God had no part in this process.'" (Shermer, M.B., "The Gradual Illumination of the Mind," Scientific American, February 2002. My emphasis).

Therefore Phillip E. Johnson (and I) regards Gould's focusing on Pope John Paul II's "recognition of the theory of evolution as more than a hypothesis," while ignoring "the Pope's crucial qualification that `theories of evolution which, in accordance with the philosophies inspiring them, consider the spirit as emerging from the forces of living matter or as a mere epiphenomenon of this matter, are incompatible with the truth about man,'" as an example of Gould's "unscrupulousness" and his "essay is a tissue of half-truths aimed at putting the religious people to sleep, or luring them into a `dialogue' on terms set by the materialists":

"Gould displays both his talent and his unscrupulousness in an essay in the March 1997 issue of Natural History, entitled `Nonoverlapping Magisteria' and subtitled `Science and religion are not in conflict, for their teachings occupy distinctly different domains.' With a subtitle like that, you can be sure that Gould is out to reassure the public that evolution leads to no alarming conclusions. True to form, Gould insists that the only dissenters from evolution are `Protestant fundamentalists who believe that every word of the Bible must be literally true.' Gould also insists that evolution (he never defines the word) is `both true and entirely compatible with Christian belief.' ... The centerpiece of Gould's essay is an analysis of the complete text of Pope John Paul's statement of October 22, 1996 to the Pontifical Academy of Sciences endorsing evolution as `more than a hypothesis.' He fails to quote the Pope's crucial qualification that `theories of evolution which, in accordance with the philosophies inspiring them, consider the spirit as emerging from the forces of living matter or as a mere epiphenomenon of this matter, are incompatible with the truth about man.' Of course, a theory based on materialism assumes by definition that there is no `spirit' active in this world that is independent of matter. ... Gould's essay is a tissue of half-truths aimed at putting the religious people to sleep, or luring them into a `dialogue' on terms set by the materialists. ... Gould insists, however, that all such discussion must cede to science the power to determine the facts, and one of the facts is an evolutionary process that is every bit as materialistic and purposeless for Gould as it is for Lewontin or Dawkins. If religion wants to accept a dialogue on those terms, that's fine with Gould-but don't let those religious people think they get to make an independent judgment about the evidence that supposedly supports the `facts.' And if the religious people are gullible enough to accept materialism as one of the facts, they won't be capable of causing much trouble." (Johnson P.E., "The Unraveling of Scientific Materialism," First Things, No. 77, November 1997, pp.22-25)

But the point is, unless Pope Benedict more forcefully emphasises that materialistic-naturalistic evolution is (including theistic naturalistic evolution) which denies apriori design and God's supernatural intervention in life's history, is incompatible with Roman Catholicism, the atheistic Darwinists outside the church (and the theistic Darwinists within) it will just keep ignoring John Paul II's qualifications and keep claiming that he declared that "evolution" was "a fact."

Johnson (referring to Jesus' saying in Mat. 6:24 that, "No one can serve two masters. Either he will hate the one and love the other, or he will be devoted to the one and despise the other"), points out that when the mind tries to serve the two masters of naturalism and theism, "naturalism in the end will be the true master and theism will have to abide by its dictates":

"Scientific naturalism, on the other hand, does leave a place for `religious belief,' provided that the religious believers do not challenge the authority of naturalistic science to say what is real and what is not. ... blurring the issues a little to save a place for theistic religion in a naturalistic intellectual culture may seem like a sound strategy. Of course, I do not agree with that strategy. I do not think that the mind can serve two masters, and I am confident that whenever the attempt is made, naturalism in the end will be the true master and theism will have to abide by its dictates." (Johnson, P.E., "Darwin on Trial," InterVarsity Press: Downers Grove IL, Second Edition, 1993, p.169)

I am sure that Pope Benedict is well aware of this too, and that unless he deals decisively and soon with the the cancer of naturalism within his church, there may not be a Roman Catholic church in the not-too-distant future.

If that sounds too far-fetched, consider that the "Anglican Church of Canada, one of the country's largest and oldest denominations" (and I expect other Protestant denominations which have been taken over secular ideologies and ideologists) is "facing extinction by the middle of this century":

"The Anglican Church of Canada, one of the country's largest and oldest denominations, is in precipitous decline losing 13,000 members each year and facing extinction by the middle of this century, says a new report prepared for prepared for the church's bishops."(Foot, R., "Anglican ranks on road to extinction, grim report finds," CanWest News Service, December 01, 2005)

To be continued in part #2.

Stephen E. Jones, BSc (Biol)
Genesis 1:8. God called the expanse "sky." And there was evening, and there was morning-the second day.