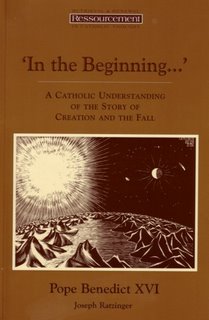 [Graphic: Pope Benedict XVI's book on creation (written when he was Cardinal Ratzinger)]

Philosophers, scientists and other intellectuals close to Pope Benedict XVI will gather at his summer palace outside Rome this week for intensive discussions that could herald a fundamental shift in the Vatican's view of evolution. [I was pleasantly surprised to see this article on ID featured fairly prominently on page 5 of Western Australia's main daily newspaper. On Googling I found versions of it in the Sydney Morning Herald, The Melbourne Age and The London Guardian]

However, the ID movement may have a problem in being too closely aligned with a specific Christian denomination (particularly the world's largest).

But if the Roman Catholic Church did align itself with ID, it would give an enormous boost to ID, and deflate the Darwinists. And those anti-ID Roman Catholics (like Ken Miller, John Haught and Edward T. Oakes) might have to reconsider their position, lest they go the way of George Coyne! After all, as Cardinal Ratzinger, Pope Benedict was on record as preferring a "A Leaner, Smaller, Purer Church".

Here are some quotes from Pope Benedict's book where, as then Cardinal Ratzinger, he uses the term "project," which seems to be a synonym for design (see Livescience and Discovery Institute News), and indeed uses both "intelligence" and "design":

"The story of the dust of the earth and the breath of God ... does not in fact explain how human persons come to be but rather ... their inmost origin and casts light on the project that they are":

"Creation and Evolution All of this is well and good, one might say, but is it not ultimately disproved by our scientific knowledge of how the human being evolved from the animal kingdom? Now, more reflective spirits have long been aware that there is no either-or here. We cannot say: creation or evolution, inasmuch as these two things respond to two different realities. The story of the dust of the earth and the breath of God, which we just heard, does not in fact explain how human persons come to be but rather what they are. It explains their inmost origin and casts light on the project that they are. And, vice versa, the theory of evolution seeks to understand and describe biological developments. But in so doing it cannot explain where the `project' of human persons comes from, nor their inner origin, nor their particular nature. To that extent we are faced here with two complementary - rather than mutually exclusive - realities." (Ratzinger, J., "`In the Beginning ...': A Catholic Understanding of the Story of Creation and the Fall," Ramsay, B., transl., Eerdmans: Grand Rapids MI, 1995, p.50. Emphasis original)

Indeed, in addition to "project": "an organism and a machine have many points in common. For both of them realize a project, a thought-out and considered plan, which is itself coherent and logical"; Pope Benedict (as Cardinal Ratzinger) used the word "design," "Their [an organism and a machine's] functioning presupposes a precisely thought-through and therefore reasonable design":

"Now let us go directly to the question of evolution and its mechanisms. Microbiology and biochemistry have brought revolutionary insights here. They are constantly penetrating deeper into the inmost mysteries of life, attempting to decode its secret language and to understand what life really is. In so doing they have brought us to the awareness that . Their functioning presupposes a precisely thought-through and therefore reasonable design. But in addition to this commonality there are also differences. A first and somewhat unimportant one may be described as follows: An organism is incomparably smarter and more daring than the most sophisticated machines. They are dully planned and constructed in comparison with an organism. A second difference goes deeper: An organism moves itself from within, unlike a machine, which must be operated by someone from without. And finally there is a third difference: An organism has the power to reproduce itself; it can renew and continue the project that it itself is. In other words, it has the ability to propagate itself and to bring into existence another living and coherent being like itself." (Ibid., 1995, pp.54-55. Emphasis original)

The "new branches" that "shoot out from" "the tree of life" are "not the products of chance and error" but are "the great projects of the living creation" (including "the human being" which "is indeed a divine project") which "point to a creating Reason" and indeed "show us a creating Intelligence" (my emphasis) "and they do so more luminously and radiantly today than ever before":

"It is the affair of the natural sciences to explain how the tree of life in particular continues to grow and how new branches shoot out from it. This is not a matter for faith. But we must have the audacity to say that the great projects of the living creation are not the products of chance and error. Nor are they the products of a selective process to which divine predicates can be attributed in illogical, unscientific, and even mythic fashion. The great projects of the living creation point to a creating Reason and show us a creating Intelligence, and they do so more luminously and radiantly today than ever before. Thus we can say today with a new certitude and joyousness that the human being is indeed a divine project, which only the creating Intelligence was strong and great and audacious enough to conceive of. Human beings are not a mistake but something willed; they are the fruit of love. They can disclose in themselves, in the bold project that they are, the language of the creating Intelligence that speaks to them and that moves them to say: Yes, Father, you have willed me." (Ibid., 1995, pp.56-57)

The controversial theory has split education and religious authorities around the world. Some of these splits are probably due to misunderstandings. And I can accept that many (if not most) Bible-centred Christians could be uninterested in ID, or even hostile to it if they think it does not go far enough and identify the designer with the God of the Bible.

But others who claim to be Christians and yet are virulently hostile to design in general and ID in particular, have (in my opinion) been taken captive by a "hollow and deceptive philosophy" (Col 2:8) namely a rampant Neo-Gnosticism (or Theistic Naturalism) which finds repugnant (as Gnosticism did in the early centuries of the Christian Church) the idea that God would intervene supernaturally in the world. Significantly Pope Benedict in his book criticises modern Gnosticism.

Critics say it is a disguise for creationism. They are wrong. For starters: 1) Creationism is based on the Bible, whereas ID is based solely on the evidence of nature; 2) Creationism identifies the Designer with the Christian (or Jewish or Islamic) God, but ID makes no claim as to the identity of the designer; and 3) Not all IDists are creationists (in fact some are not even theists) and not all creationists are IDists (and indeed some creationists are strongly opposed to ID). See also Stephen C. Meyer, "Intelligent design is not creationism," Telegraph, 28 January 2006.

Catholic schools in WA do not teach intelligent design and have no plans to do so. Catholic Education Office assistant director for religious education Debra Sayce said yesterday she would be surprised if the Pope was planning to adopt the theory. "Our Church tells us very clearly that God created the world and we don't need to use the word intelligent design," she said. Perhaps Ms. Sayce needs to read Pope Benedict's book!

But the Catholic Education Office would review its stance if Perth Archbishop Barry Hickey directed schools to teach intelligent design, she said. Archbishop Hickey is away but a spokesman said he had previously been quoted as saying intelligent design had a role to play in classrooms because students should understand they were a product of God, not of chance. Indeed he did:

"Catholic Archbishop Barry Hickey said intelligent design, while not itself demanding belief in a creator, nevertheless sat comfortably with Catholics and should be taught alongside evolutionary theory in science lessons. `Intelligent design is a far more elegant description of historical changes than an entirely evolutionary approach, and it therefore should not be ignored in the classroom,' he said. `The problem in our society is that the theory of evolution has been installed in our education system and is defended by too many educators as the sole scientific approach to the existence of the universe and the appearance of the many forms of life. `One result is that too many students are unable to protect themselves from the conscious or subconscious assumption that human life has no purpose or meaning.'" (Buggins, A. & Hiatt, B., "Controversial intelligent design view of the origins of life moves step closer to the WA school curriculum," The West Australian, August 12, 2005, p.9)

I knew of Archbishop Hickey when he was plain Bishop Hickey when we both lived in the same Western Australian rural city, Geraldton. He is highly respected as a devout Christian (unlike his counterparts in some Protestant denominations), and given what he said above, I would not be surprised if he did direct Roman Catholic schools in Western Australia to teach ID. However, I presume that would probably have to happen nationally, but if Pope Benedict does give the green light to ID, then I am sure that will happen.

Education Minister Ljiljanna Ravlich was unavailable for comment yesterday but she has previously said that intelligent design should not be taught in science classes in government schools, although it could be discussed in some learning and teaching programs which involved theories on the origins of life. As I have previously commented (e.g. 11-Aug-05, 13-Aug-05 & 01-Nov-05) government schools in Australia are being deserted in droves by parents withdrawing their children and sending them to private religious schools, and one of the main reasons is the lack of strong ethical values in the secular educational system. As there is no Constitutional impediment to teaching ID in Australian government schools (even religious instruction can be, and is, taught electively), I am sure that if ID did start being taught in Roman Catholic schools, it would also have to be taught (even if only electively) in Australian government schools.