Birds have navigational systems nearly as sophisticated as those of modern airliners! 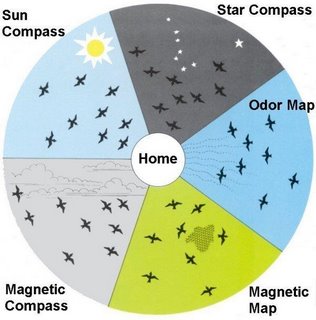 I have hundreds (if not thousands) of unfiled journal articles, many dating back to the 1980s, that I am in the process of integrating into my filing system.

"The most ordinary-looking migratory birds turn out to have onboard navigational systems that rival those of modern airliners in sophistication ... For decades, scientists believed that even for the most complex journeys, birds relied on the biological equivalent of a pocket guidebook. But a rash of recent discoveries suggests that birds have navigational systems nearly as sophisticated as those of modern airliners. To get a fix on direction and position, they process multiple inputs from the stars, the Sun, visible landmarks, and even the Earth's magnetic field ..." (Pool, R., "Is it a plane? Is it a bird?," New Scientist, 9 November 1996, p.29, pp.29-32)

The problem for the `blind watchmaker,' i.e. the differential reproduction (aka. natural `selection') of random micromutations is that, as Darwin pointed out, "Natural selection tends only to make each being as perfect as, or slightly more perfect than, the other inhabitants of the same area":

And as "scientists" (i.e. Darwinist biologists) expected, the best that their `blind watchmaker' would (or could) come up with in bird navigation would be "the biological equivalent of a pocket guidebook," but in fact "birds have navigational systems nearly as sophisticated as those of modern airliners"!