A news item about an experimental test by a leading origin of life theorist, UC Santa Cruz chemistry professor David Deamer, which has falsified two major origin of life theories, that life emerged spontaneously from a volcanic spring or a hydrothermal vent. My comments are bold and in square brackets. I have split this post into two parts due to its length. 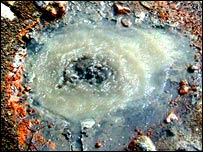 Darwin's warm pond theory tested, BBC, 13 February 2006, Rebecca Morelle ... Life on Earth was unlikely to have emerged from volcanic springs or hydrothermal vents, according to a leading US researcher. [This headline is misleading. The actual article, which is based on a Royal Society press release, is about an experiment which falsified "volcanic springs or hydrothermal vents" origin of life theories, not necessarily Darwin's "warm little pond" theory. Indeed the article (as does the press release) actually says at the end, "One possibility is that life really did begin in a 'warm little pond'" (although see my comment at the end of part #2 on that). This press release also seems to have confused sub-editors at The Times ("Study pours cold water on Darwin's theory of life"), The Australian ("Darwin may have been wrong on the origin of life)," and NEWS.com.au ("Darwin may have been wrong"). Which is not to say that Darwin's "warm little pond" theory:

"It is often said that all the conditions for the first production of a living organism are now present, which could ever have been present. But if (and oh! what a big if!) we could conceive in some warm little pond, with all sorts of ammonia and phosphoric salts, light, heat, electricity, &c., present, that a proteine [sic] compound was chemically formed ready to undergo still more complex changes, at the present day such matter would be instantly devoured or absorbed, which would not have been the case before living creatures were formed." (Darwin C.R., letter to J.D. Hooker, [1 February] 1871, in Darwin F., ed., "The Life and Letters of Charles Darwin," [1898], Basic Books: New York NY, Vol. II, 1959, reprint, pp.202-203)

is not wrong anyway. As Thaxton, et al., in their 1984 book," The Mystery of Life's Origin," which is usually credited with beginning the ID movement, pointed out, there are major problems with all theories positing the origin of life in smaller, more concentrated pools, which would include Darwin's:

"Concentrating Little Ponds. The realization that an organic soup would have been too dilute for direct formation of polymers may seem devastating to chemical evolution views. However, as Bernal has written, `The original concept of the primitive soup must be rejected only in so far as it applies to oceans or large volumes of water, and interest must be transferred to reactions in more limited zones.' [Bernal J.D., "Thermodynamics and kinetics of spontaneous generation," Nature, Vol. 186, 28 May 1960, p.694]. By this he meant lakes, pools, lagoons, and the like. These more limited zones might then have been the locus of life's origin rather than the ocean. The significance of these local places is their associated mechanisms for concentrating essential chemicals. By concentrating the monomers, the probability of their molecular interaction would have been increased. ... Critique of Concentrating Mechanism. There is no known geological evidence for organic pools, concentrated by these or other mechanisms, ever existing on this planet. ... Still, if by some means concentrated pools did develop, not only would the desired materials concentrate, but also the undesirable impurities ... that would have been the greatest obstacle to the successful concentration of organic compounds in limited zones. This would be the host of oceanic organic compounds such as amines, amino acids, aldehydes, ketones, sugars, carboxylic acids, etc. that would have destructively interacted in the ocean. The usual consequences of concentrating these would be ... merely an acceleration of the many destructive reactions ... that would also occur at slower rates in the more dilute ocean ... Stemming from this discussion, however, it is our observation that what is needed is a natural sorting mechanism. The problem demands a means of selecting organic compounds and isolating them from other chemicals with which they could destructively interact. Yet there is nothing (but the need) to suggest that such a sorting mechanism ever existed on this planet. In other words, for these more limited zones (e.g., lakes, pools, lagoons), as for the ocean itself, it is difficult to imagine significant concentrations of essential organic compounds ever accumulating. As we have seen, degradative forces need to be taken into account in realistic estimates of concentrations, and they have frequently been ignored." (Thaxton C.B., Bradley W.L. & Olsen R.L., "The Mystery of Life's Origin: Reassessing Current Theories," [1984], Lewis & Stanley: Dallas TX, 1992, Second Printing, pp.61-62, 64-66. Emphasis original)]

Experiments carried out in volcanic pools suggest they do not provide the right conditions to spawn life. [This is very significant because "volcanic pools" and "hydrothermal vents" are major origin of life theoris which may now have to be abandoned. I have added part of the above quote, and the full quote, respectively, to new sections of my "Problems of Evolution" book outline, PE 7.6.2.1.1." Problems of origin of life locations ... Oceanic organic `soup' ... Too dilute" and PE 7.6.3." Problems of origin of life locations ... Ponds, pools, lakes, etc."]

The findings will be discussed on Tuesday at an international two-day meeting to explore the latest thinking on the origin of life on Earth. It takes place at the Royal Society, the UK's academy of science, in London. ... David Deamer, emeritus professor of chemistry at the University of California at Santa Cruz, said ahead of his presentation: "It is about 140 years since Charles Darwin suggested that life may have begun in a 'warm little pond'. We are now testing Darwin's idea, but in 'hot little puddles' associated with the volcanic regions of Kamchatka [Russia] and Mount Lassen [California, US]. [It is to Deamer's credit that he was willing to actually go out into the real world and experimentally test the volcanic hot pools ('hot little puddles') origin of life theory, but it is a criticism (if not a condemnation) of origin of life theory generally if no one had bothered to do it before this.]

"The results are surprising and in some ways disappointing. It seems that hot acidic waters containing clay do not provide the right conditions for chemicals to assemble themselves into 'pioneer organisms.'" [That is, they don't even get to first base. There was no evidence anyway that "chemicals ... assemble themselves into 'pioneer organisms'" in "hot acidic waters containing clay" or anywhere!]

Professor Deamer said that amino acids and DNA, the "building blocks" for life, and phosphate, another essential ingredient, cling to the surfaces of clay particles in the volcanic pools. "The reason this is significant is that it has been proposed that clay promotes interesting chemical reactions relating to the origin of life," he explained. "However," he added, "in our experiments, the organic compounds became so strongly held to the clay particles that they could not undergo any further chemical reactions." [So it seems that this also falsifies all clay-based (e.g. Cairns-Smith's) origin of life theories!] ...

While our understanding of the world is rapidly increasing, the answer to how life began on Earth remains elusive. [This in fact was an explicit prediction of Thaxton, et al. (and therefore of ID) that ignoring the evidence "intelligent, exogenous intervention" in "prebiotic simulation experiments" "will prove to be a barrier to solving the mystery of life's origin":

"Over the years a slowly emerging line or boundary has appeared which shows observationally the limits of what can be expected from matter and energy left to themselves, and what can be accomplished only through what Michael Polanyi has called "a profoundly informative intervention." [Polanyi M., "Life Transcending Physics and Chemistry," Chemical Engineering News, August 21, 1967, p.54]. When it is acknowledged that most so-called prebiotic simulation experiments actually owe their success to the crucial but illegitimate role of the investigator, a new and fresh phase of the experimental approach to life's origin can then be entered. Until then however, the literature of chemical evolution will probably continue to be dominated by reports of experiments in which the investigator, like a metabolizing Maxwell Demon, will have performed work on the system through intelligent, exogenous intervention. Such work establishes experimental boundary conditions, and imposes intelligent influence/control over a supposedly "prebiotic" earth. As long as this informative interference of the investigator is ignored, the illusion of prebiotic simulation will be fostered. We would predict that this practice will prove to be a barrier to solving the mystery of life's origin." (Thaxton, et al., "The Mystery of Life's Origin," 1984, p.185. Emphasis original.)]

The conference, involving more than 200 leading international scientists, will also explore other theories including whether life arrived from space. [Theories which posit that "life arrived from space" (panspermia) are an admission that all naturalistic Earth-based origin of life on theories have failed! Although this is no doubt attractive to NASA, which funds most `astrobiology' research these days.]