The various causal explanations that have been proposed to account for the evolution of animal body plans in the Cambrian fall into two main categories: environmental and biological.

There is evidence of a disruption in the carbon cycle at the Proterozoic- Cambrian boundary (~543 Ma) that indicates a mass extinction of the Ediacaran biota, that would have paved the way for an adaptive radiation of survivors, as occurred after other mass extinctions, for example, the Permian-Triassic (~250 Ma) and Cretaceous-Tertiary (~65 Ma) mass extinctions (Kerr, 2002; Knoll, 2003). This ties in with the plate tectonics and temperature increase explanations.

A proposed major environmental cause of the Cambrian evolution of animal body plans is the "snowball Earth," a series of three global ice-ages in the Neoproterozoic, the last of which ended ~550 Ma (Conway Morris, 2002; Hoffman, Kaufman, Halverson, & Schrag, 1998). The ice-ages were triggered by the break-up of the supercontinent Rodinia between 800-700 Ma, which increased continental margins and therefore runoff and weathering, reduced atmospheric CO2 via the silicate-carbon cycle, leading to an ice-house effect, where average global temperature fell to -50°C (Donnadieu, Goddéris, Ramstein, Nédélec, Meert, 2004; Eyles & Januszczak, 2004).

The effect would be globally catastrophic, similar to a giant asteroid impact, with photosynthesis ceasing under thick ice sheets, and the resulting anoxic conditions extinguishing eukaryotic life (Runnegar, 2000). However, modelling of the late Proterozoic (800-600 Ma), shows that the ice sheets would have left an equatorial belt of open water, providing a refugium for multicellular animals (Hyde, Crowley, Baum, Peltier, 2000).

Each ice-house effect would be followed by a runaway greenhouse effect because of volcanic outgassing and the lack of a carbon cycle, with global average temperatures rising rapidly to +50°C (Eyles & Januszczak, 2004). Eukaryotic life would then have passed through a series of population bottlenecks, 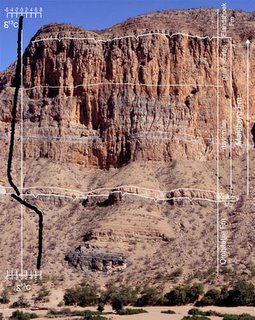 with each successive post-glacial period being re-populated by descendants of the comparatively few survivors (Runnegar, 2000). However it was only after the last of these three ice ages (~580 Ma), which was the shortest lasting and least extensive, that the Precambrian Ediacaran biota appeared, making the "snowball Earth" an unlikely primary trigger (Conway Morris, 2002; Knoll, 2003).

It is theorised that the explosion appearance of animal body plans was caused by available oxygen reaching a high enough concentration in the Cambrian to support growth in body size, a more active metabolism required for feeding and other activities by mobile animals (Hedges, Blair, Venturi & Shoe, 2004; Kerr, 1993). Size is constrained by oxygen availability for diffusion and there is evidence of a build up of organic sediment before the Cambrian that enabled more oxygen produced by photosynthetic cyanobacteria to be available for animal respiration (Knoll, 2003). The fact that all molecular estimates yield divergence times well before the first undisputed bilaterian trace fossils may indicate that small size constrained by oxygen availability was a factor in their previous lack of a fossil record (Knoll, 2003). However, there is a timing problem, because the first sizeable multicellular animals begin to appear in the fossil record ~575 Ma, well before the Cambrian explosion (Kerr, 1993).

Some researchers have suggested an initial filling of empty ecological niches as an explanation of the Cambrian explosion (Gould, 1994a; Levinton, 1992). Entering a world free of competition, it is proposed that there was widespread experimentation in different themes of animal architecture (Hickman, Roberts & Larson, 2000, p.36). But against this, mass extinctions such as that which occurred at the end of the Permian period 230 Ma, when 96% of all marine species disappeared, led to no new body plans arising to fill the vacated niches (Levinton, 1992).

Some have suggested that until animals reached a certain level of physiological and anatomical complexity, they could not expand into the many empty ecological niches, which they did explosively when they did achieve this complexity threshold (Conway Morris, 1998; Kerr, 1993; Raff, 1999). In favour of this is that the first metazoans may have been of microbial size, analogous to ciliates (Conway Morris, 2002). This explanation is complementary to the oxygen level and empty environmental niches explanations.

Another hypothesis emphasizes the emergence of predator-prey relationships, which triggered diverse adaptations, including shells and new modes of locomotion (Campbell, Reece & Mitchell, 1999, p.596; Kerr, 1993). The emergence of vision in both predators and prey would have been such an enormous advantage to both predators and prey, that it has been proposed as a major driving force in the Cambrian explosion (Knight, 1998).

Homeotic (hox) genes (Fig. 8) direct the development of animal body plans, are common across the diverse animal phyla, and so may have been present in the common ancestor of bilateral animals (Campbell, Reece & Mitchell, 1999, p.596). Ribosomal 18SrDNA phylogenies suggest a three-branched tree for the Bilateria, comprising deuterostomes (chordates and echinoderms); and two protostome clades, the ecdysozoans, or moulting phyla (arthropods, nematodes and priapulids), and lophotrochozoans (annelids, molluscs, brachiopods, platyhelminths and nemerteans) (de Rosa, et al., 1999; Gould, 2002, p.1149). The distribution of hox genes reflects this pattern, pointing to the ancestors of each of these two major protostome lines having a minimum of eight to ten Hox genes, which implies that the major period of Hox gene origin and expansion occurred in a common ancestor before the radiation of these three bilaterian superclades (de Rosa, et al., 1999). Some therefore assume that that the emergence and duplication of Hox genes could be the primary explanation of the 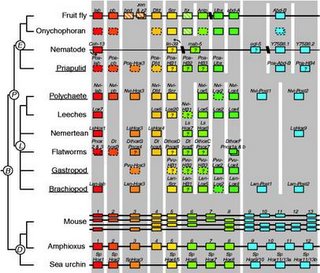 Fig. 8 Hox genes distribution compared with 18SrDNA phylogeny. (B) is the common bilaterian ancestor; (P) and (D) are the common protostome and deuterostoma ancestors, respectively; and (E) and (L) are the stem ecdysozoan and lophotrochozoan, respectively.. Source de Rosa, et al., 1999).

All of the above?

The above proposed explanations for the Cambrian explosion are not mutually exclusive and some, if not all, are complementary and synergistic. The Cambrian radiation of the animal phyla was a unique event in the history of life and was probably the result of a sequence of environmental, ecological and biological interactions, beginning in the Precambrian and working in combination, including: an increase in the amount of atmospheric oxygen; the innovation and elaboration of Hox genes that enabled the development of complex body plans; and ecological niches empty of organisms with that new complexity (Carroll, 1997, p.348; Knoll, & Carroll, 1999). The Cambrian radiation itself may have been triggered by an environmental perturbation near the Proterozoic-Cambrian boundary which was then amplified by intense ecological interactions within new ecosystems (Knoll, & Carroll, 1999).

The Cambrian evolution of animal body plans is at last starting to become less mysterious, but it is not therefore becoming less wonderful (Campbell, Reece & Mitchell, 1999, p.596).

Babcock, L.E. (2001). The Chengjiang Biota: Record of the Early Cambrian Diversification of Life and Clues to Exceptional Preservation of Fossils, GSA Today, 11(2), 4-9.

Conway Morris S. (1998). The Crucible of Creation: The Burgess Shale and the Rise of Animals. Oxford, UK: Oxford University Press.

Giribet, G. (2002). Current advances in the phylogenetic reconstruction of metazoan evolution. A new paradigm for the Cambrian explosion? Molecular Phylogenetics and Evolution, 24(3), 345-357.

Raff, R.A. (1999). Creating the animal planet: The Crucible of Creation-The Burgess Shale and the Rise of Animals by Simon Conway Morris, and The Garden of Ediacara-Discovering the First Complex of Life by Mark A.S. McMenamin. Trends in Ecology & Evolution. 14(1), 39.