MORE religion, including the intelligent design theory ... should be taught in public and private schools, church leaders say 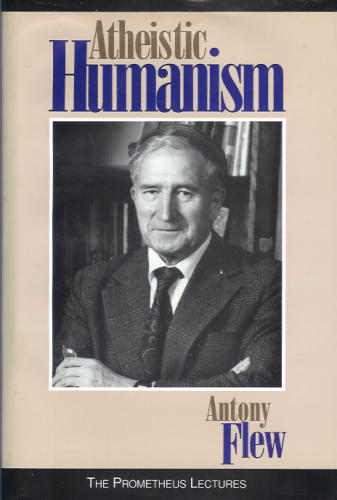 Continuing from the previous post, here is the unwebbed article calling for ID to be taught in Western Australian schools, which appeared in yesterday's (Easter Sunday's), Perth Sunday Times newspaper.

[Left: Antony Flew, on the cover of his 1996 book "Atheistic Humanism" (which position he has now abandoned on the basis of the scientific evidence for intelligent design-see below), Amazon.com]

While "intelligent design theory" is not "religion" but scientific in that it is based solely on the evidence of nature, not the Bible, the main point is that Western Australian's major Sunday newspaper, is echoing the call by the Roman Catholic Archbishop of Perth, Barry Hickey, that "intelligent design theory, should be taught in public and private schools" (my emphasis)!

Perth's Catholic and Anglican archbishops said during Easter, that children needed more focus on things like the meaning of life in school subjects as well as religion. Otherwise schools risked producing children who were "robots" suffering from a "deep emptiness". Catholic Archbishop Barry Hickey said intelligent design theory would give students a chance to question the mysteries of life that science couldn't explain.

While ID theorists may not normally put it that way, Archbishop Hickey's argument that "intelligent design theory would give students a chance to question the mysteries of life that science couldn't explain" does make the points: 1) that there are "mysteries of life that" materialistic-naturalistic "science" seems unable to plausibly "explain." For example the origin of life, which led leading atheist philosopher Antony Flew , on the basis of the scientific evidence for intelligent design, to abandon atheism in favour of a deistic God creating the first living organism:

"A British philosophy professor who has been a leading champion of atheism for more than a half-century has changed his mind. He now believes in God -- more or less -- based on scientific evidence, and says so on a video released Thursday. At age 81, after decades of insisting belief is a mistake, Antony Flew has concluded that some sort of intelligence or first cause must have created the universe. A super-intelligence is the only good explanation for the origin of life and the complexity of nature, Flew said in a telephone interview from England. Flew said he's best labeled a deist like Thomas Jefferson, whose God was not actively involved in people's lives. ...,' he said. `It could be a person in the sense of a being that has intelligence and a purpose, I suppose.' ... Over the years, Flew proclaimed the lack of evidence for God while teaching at Oxford, Aberdeen, Keele, and Reading universities in Britain, in visits to numerous U.S. and Canadian campuses and in books, articles, lectures and debates. There was no one moment of change but a gradual conclusion over recent months for Flew, a spry man who still does not believe in an afterlife. Yet biologists' investigation of DNA `has shown, by the almost unbelievable complexity of the arrangements which are needed to produce (life), that intelligence must have been involved,' Flew says in the new video, `Has Science Discovered God?' .... The first hint of Flew's turn was a letter to the August-September issue of Britain's Philosophy Now magazine. `It has become inordinately difficult even to begin to think about constructing a naturalistic theory of the evolution of that first reproducing organism,' he wrote. .. if his belief upsets people, well `that's too bad,' Flew said. `My whole life has been guided by the principle of Plato's Socrates: Follow the evidence, wherever it leads.' ... Flew told The Associated Press his current ideas have some similarity with American `intelligent design' theorists, who see evidence for a guiding force in the construction of the universe. He accepts Darwinian evolution but doubts it can explain the ultimate origins of life." (Ostling, R.N., "Atheist Philosopher, 81, Now Believes in God," Livescience, 10 December 2004).

And 2) "students" don't have the "chance to question" or hear about questions of same. Yet as this editorial in The Dallas Morning News put it, "If the scientific data are compelling enough to cause an atheist academic of Antony Flew's reputation to recant much of his life's work, why shouldn't Texas" and all "schoolchildren be taught the controversy?" (my emphasis):

"An intellectual bombshell dropped last week when British professor Antony Flew, for decades one of the world's leading philosophers of atheism, publicly announced that he now affirms the existence of a deity. To be sure, Mr. Flew has not become an adherent of any creed. He simply believes that science points to the existence of some sort of intelligent designer of the universe. He says evidence from DNA research convinces him that the genetic structure of biological life is too complex to have evolved entirely on its own. Though the 81-year-old philosopher believes Darwinian theory explains a lot, he contends that it cannot account for how life initially began. We found this conversion interesting in light of last year's controversy regarding proposed revisions to the state's high school biology textbooks. Our view then was that while religion must be kept out of science classes, intellectual honesty demands that when science produces reliable data challenging the prevailing orthodoxies, students should be taught them. We were bothered by Harvard geneticist Richard Lewontin's statement that for scientists, materialism must be `absolute, for we cannot allow a Divine Foot in the door.' That's called stacking the deck. Mr. Flew may be dead wrong, but it's refreshing to see that an academic of his stature is unafraid to let new facts change his mind. The philosopher told The Associated Press that if admirers are upset with his about-face, then `that's too bad. My whole life has been guided by the principle of Plato's Socrates: Follow the evidence, wherever it leads.' If the scientific data are compelling enough to cause an atheist academic of Antony Flew's reputation to recant much of his life's work, why shouldn't Texas schoolchildren be taught the controversy?" (Editorial, "An Atheist's Apostasy," The Dallas Morning News, December 15, 2004)

The theory, which suggests some parts of the universe and nature are so complex they must have been designed by a higher intelligence, has sparked debate and court battles in the US. "I would like the notion of intelligent design to be examined, also in government schools, without necessarily becoming a proof of the existence of God," Archbishop Hickey said.

Hickey hits the nail on the head. The issue of whether there is scientific evidence that "some parts of the universe and nature are so complex they must have been designed by a higher intelligence" is logically separate from the issue of whether that is "proof of the existence of God." At the very least, "the notion of intelligent design" should "be examined ... in government schools" because:

[Right: "Plato and Aristotle, depicted here in The School of Athens, both developed philosophical arguments based on the universe's apparent design," Wikipedia]

1) students should be prepared in schools for major intellectual issues that they will confront as adult citizens; and 2) the Argument from Design to a Designer is part of our Western intellectual heritage going back at least to the Greek philosophers Plato (c.427-347 BC) and Aristotle (c.384-322 BC).

"Because I think that if it is not (examined), then science is not being entirely honest. I think science has to show us what is there. And if it comes up with a very intricate marvellous design, let's call it intelligent design." Under such teaching, children with faith would say, "yes that's the result of the creator", and those without would say, "it's there by chance and we have no explanation", Archbishop Hickey said. "(those) with faith will make the next step to God," he said. "The school can't do that. But it can say, `yes, look at the human eye, look at all the things we find in nature. There seems to be an ... intelligent design in what we discover'."

This is an important point. A science that, rather than simply present the evidence for and against its theory of evolution, but instead "employ[s] propaganda and legal barriers to prevent relevant questions from being asked" and "rel[ies] on enforcing rules of reasoning that allow no alternative to the official story":

"In the final analysis, it is not any specific scientific evidence that convinces me that Darwinism is a pseudoscience that will collapse once it becomes possible for critics to get a fair hearing. It is the way the Darwinists argue their case that makes it apparent that they are afraid to encounter the best arguments against their theory. A real science does not employ propaganda and legal barriers to prevent relevant questions from being asked, nor does it rely on enforcing rules of reasoning that allow no alternative to the official story. If the Darwinists had a good case to make, they would welcome the critics to an academic forum for open debate, and they would want to confront the best critical arguments rather than to caricature them as straw men. Instead they have chosen to rely on the dishonorable methods of power politics." (Johnson, P.E., "The Wedge of Truth: Splitting the Foundations of Naturalism," Intervarsity Press: Downers Grove IL, 2000, p.141)

is not being "entirely honest."

Such a science has forfeited its right to that title and has in fact become a "a pseudoscience", i.e. a "body of knowledge, methodology, belief, or practice that claims to be scientific but does not follow the scientific method," "a pretended or spurious science; a collection of related beliefs about the world mistakenly regarded as being based on scientific method or as having the status that scientific truths now have" (my emphasis), that in particular, does not "Follow the evidence, wherever it leads."

Anglican Archbishop Roger Herft said children did think about "deeper questions". "If our classrooms do not allow for the exploration of the spirit, the exploration of the questions of meaning, then we're going to produce, ultimately, human beings who have deep emptiness in them," he said. "They will seek to fill that emptiness in a number of ways, whether it's drugs, or violence, or gang life or other groups that ultimately tend to be antisocial."

As mentioned in my previous post, there is however no evidence that I am aware of that Anglican Archbishop Roger Herft is in favour of ID, and nor does it seem likely given that he is described as "a leading liberal" in Australia's Anglican Church.

WA Education Minister Mark McGowan said he would not introduce intelligent design into the school curriculum and it was not part of school science programs because it was not evidence-based. He said questions like "where do we come from?" and "who made us?" were often discussed in class and children were able to make their own decisions. Editorial: Page 71 ...

If McGowan really said that "intelligent design ... was not evidence-based," then he presumably has not personally studied ID primary literature first-hand, but is merely parroting secondhand Darwinist propaganda.

But as I have mentioned in previous posts on this, e.g. "Creation theory wins support" (13-Aug-05)", "Teachers reject creation theory" (14-Aug-05), "Kosky rules intelligent design a faith, etc" (01-Nov-05), "In a class of their own, etc" (17-Nov-05) & "Pope takes a close look at intelligent design" (29-Aug-06); there is mounting competitive pressure on Australian State schools as parents are increasingly sending their children to private schools, and as more private schools include ID in their curriculum, sooner or later public schools will have to follow suit, or be left behind in a second-rate educational ghetto.