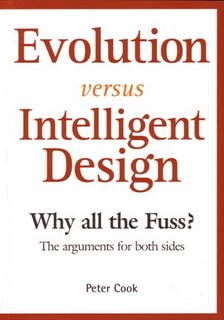 The author (who I had not heard of and cannot find on the Web) is described on the back cover as having "a BA in Religious Studies and a PhD in Philosophy from the University of Sydney" and "has taught logic and argument as well as publishing articles on contemporary European philosophy and philosophy of language." I have skimmed through the book (it is only ~128 half-sized pages) and I can see there are many things that I disagree with (including much that is simply irrelevant to ID)!

However, an advantage in working through the book is that eventually I would then have covered many of the issues for and against ID and evolution (or rather Darwinism).

Which is my first point that the title already sets up a Fallacy of False Dilemma. ID is not necessarily opposed to "evolution." In fact Mike Behe, a leader of the ID movement has described his position as "evolution occurred, but was guided by God":

"[Eugenie] Scott refers to me as an intelligent design `creationist,' even though I clearly write in my book `Darwin's Black Box' (which Scott cites) that I am not a creationist and have no reason to doubt common descent. In fact, my own views fit quite comfortably with the 40% of scientists that Scott acknowledges think `evolution occurred, but was guided by God.' Where I and others run afoul of Scott and the National Center for Science Education (NCSE) is simply in arguing that intelligent design in biology is not invisible, it is empirically detectable. The biological literature is replete with statements like David DeRosier's in the journal `Cell': `More so than other motors, the flagellum resembles a machine designed by a human' [DeRosier, D.J., "The Turn of the Screw: The Bacterial Flagellar Motor," Cell, Vol. 93, 1998, p.17]. Exactly why is it a thought-crime to make the case that such observations may be on to something objectively correct?" (Behe M.J., "Intelligent Design Is Not Creationism," Science, dEbate, 7 July 2000)

And Bill Demsbki another ID leader has stated that "intelligent design is compatible with ... the most far-ranging evolution":

"Where does intelligent design fit within the creation-evolution debate? Logically, intelligent design is compatible with everything from utterly discontinuous creation (e.g., God intervening at every conceivable point to create new species) to the most far-ranging evolution (e.g., God seamlessly melding all organisms together into one great tree of life). For intelligent design the primary question is not how organisms came to be (though, as we've just seen, this is a vital question for intelligent design) but whether organisms demonstrate clear, empirically detectable marks of being intelligently caused. In principle an evolutionary process can exhibit such `marks of intelligence' as much as any act of special creation." (Dembski W.A., "Intelligent Design: The Bridge Between Science and Theology," InterVarsity Press: Downers Grove IL, 1999, pp.109-110)

What ID is opposed to is any "evolution" that denies design (e.g. Darwinian evolution, or Darwinism). So the book should have been titled, "Darwinian Evolution [or Darwinism] versus Intelligent Design."

Now to the book itself. Its Introduction (p.7) says:

"If you ... are ... interested in the debate about the teaching of evolution and intelligent design ... the internet can provide you with a seemingly limitless supply of reading materials on the topic. All of this literature, however, is written by someone who wants to convince you of their point of view. Be they a clergyman or a biologist, the author will set out arguments in favour of their own view, and present their opponents' arguments in ways often intended to make them look foolish. That is not the approach taken here. "

This is the second thing I disagree with, after the title. I have no brief to defend the "evolution" side, but it is simply not true for Cook to claim, or imply, that IDists "present their opponents' arguments in ways often intended to make them look foolish" (my emphasis). And then to claim, or imply, that he is the exception. In fact, as we shall see, Cook (either though ignorance or deliberately) does not present IDist arguments fairly, although to his credit he is fairer than the average ID critic.

"This book aims to present both sides of the argument about evolution and intelligent design without bias, in order that you, the reader, can formulate your own view. " (p.7)

I remember when I was doing a philosophy of science unit for my biology degree and our lecturer (a former nuclear physicist) wisely observed that everyone is biased on issues that are important to them, and the best that can be done is to be aware of, and declare upfront, our respective biases, so that our listeners or readers can take those biases into account when evaluating our arguments.

She was not specifically talking about evolution or intelligent design, but I am sure that she would agree that no one is "without bias" on those topics. It is a defect that Cook he does not declare upfront what his position is on "evolution" and "intelligent design."

"Both theories are explained in detail, the arguments for each viewpoint are presented as strongly as they can be, and where possible these arguments are put side by side for easy comparison." (p.7)

This is a commendable aim, but it is unrealistic. Cook does not present ID's "arguments ... as strongly as they can be" (to put it mildly!), although he might sincerely think he is. It is evident (as we shall see) that he is not neutral with respect to ID (although he may be trying to be). It would have been better if Cook had invited a Darwinist and an IDist to present their positions on either side of each issue, rather than one person (like Cook) thinking he can present both positions neutrally and fairly.

"The final chapter is titled `Where to stand?' but it does not advocate a particular position on the debate. Rather, it simply explores the positions available for you, the reader, to take." (p.7)

If I do eventually work my way through the book, as one who has been a member of the ID movement since 1994, the "reader" of the book who finds my webbed comments, will have a true ID position to chose between.

Hey there. I'm about half way through the book that you mentioned here, and I must admit that I can't detect any bias (so far). Though then again I don't have a very strong understanding of the ID arguments.

Just curious (and please don't take this the wrong way), where did you get your science degree?

I'd love to hear more of your views on the whole ID vs. evolution debate. Could you possible recommend a good book which concisely and accurately covers the arguments in favour of ID?

>Hey there. I'm about half way through the book that you mentioned here, and I must admit that I can't detect any bias (so far).

I had forgotten about this book and this post.

My point was that Cook claimed to be "without bias" and that is *impossible*. From memory he was biased against ID, but not strongly. No doubt it was unconscious.

But things have moved on and I now don't have time (for the moment at least) to continue to blog on it as I had planned to do.

>Though then again I don't have a very strong understanding of the ID arguments.

This is an important point. Those who are not committed IDists (as I am) and therefore don't understand it, might sincerely not *think* they are biased against ID, when from my perspective they are.

But that does not mean they are *strongly* biased against ID, as for example Robyn Williams is in his book, "Unintelligent Design" (2006).

>Just curious (and please don't take this the wrong way), where did you get your science degree?

Why would I take it the wrong way? It was from Edith Cowan University in Western Australia, as I state on my Testimony page [http://tinyurl.com/ydfn3t].

>I'd love to hear more of your views on the whole ID vs. evolution debate.

You are welcome to read my blog and those pro-ID blogs listed on my blogroll.

>Could you possible recommend a good book which concisely and accurately covers the arguments in favour of ID?

Probably William Dembski's "The Design Revolution: Answering the Toughest Questions About Intelligent Design" (2004) would best do that. Next I would recommend Michael Behe's "Darwin's Black Box" (10th Anniversary Edition, 2006).

Tom Woodward's "Doubts about Darwin" (2003) as well as Larry Witham's "By Design" (2003) are good historical overviews of ID and the ID Movement.