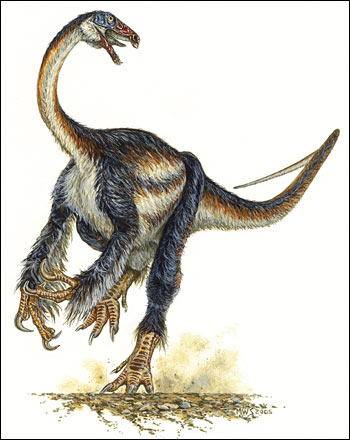 New Feathered Dino Found in Utah, Discovery News, Jennifer Viegas, May 4, 2005 - Paleontologists working at the base of Cedar Mountain in Utah have discovered the remains of hundreds to thousands of a previously unknown feathered dinosaur, which in life would have resembled a nightmarish ostrich on steroids.

Scientists think the new species, Falcarius utahensis, might have originated in North America. ... [However, there is a slight problem with this "Feathered Dino" ...] No feathers were found with the fossils, but Sampson said, "a number of its close relatives found in China had feathers (preserved by unusual lake sediments) so the presumption is this animal too was feathered." ...
Killer dino 'turned vegetarian', BBC ... The "mass graveyard" of a bird-like dinosaur has been uncovered in Utah, US, Nature magazine reports this week. ... Falcarius utahensis seems to represent an intermediate stage between a carnivorous and herbivorous form. The creature, which lived about 125 million years ago, provides a "missing link" in dinosaur evolution. ... The adult dinosaur walked on two legs, was about 4m long (13ft) and stood 1.4m tall (4.5ft). It also had a woolly feather-like plumage ... [Continuing with evolution's modern equivalent of the canals on Mars (see here and here)! This is a good (bad) example of what Phil Johnson calls, "`Harter's Precept' … the way to advance in academic life is to learn to see what you are supposed to see, whether it is there or not":

"The great physicist Richard Feinberg loved to warn beginning scientists, `The first principle is that you must not fool yourself, and you are the easiest person to fool.' ... Bruno [sic. Benno] Müller-Hill teaches the same maxim: `First you fool yourself, then you fool others.' ... The German biologist Bruno Müller-Hill tells a memorable story to illustrate his thesis that `self-deception plays an astonishing role in science in spite of all the scientists' worship of truth':

When I was a student in a German gymnasium and thirteen years old, I learned a lesson that I have not forgotten.... One early morning our physics teacher placed a telescope in the school yard to show us a certain planet and its moons. So we stood in a long line, about forty of us. I was standing at the end of the line, since I was one of the smallest students. The teacher asked the first student whether he could see the planet. No, he had difficulties, because he was nearsighted. The teacher showed him how to adjust the focus, and that student could finally see the planet, and the moons. Others had no difficulty; they saw them right away. The students saw, after a while, what they were supposed to see. Then the student standing just before me-his name was Harter-announced that he could not see anything. `You idiot,' shouted the teacher, `you have to adjust the lenses.' The student did that and said after a while, `I do not see anything, it is all black:' The teacher then looked through the telescope himself. After some seconds he looked up with a strange expression on his face. And then my comrades and I also saw that the telescope was nonfunctioning; it was closed by a cover over the lens. Indeed, no one could see anything through it. ("Science, Truth and Other Values," Quarterly Review of Biology 68, no. 3 [September 1993]: 399-407)

Müller-Hill reports that one of the docile students became a professor of philosophy and director of a German TV station. `This might be expected,' he wickedly comments. But another became a professor of physics, and a third a professor of botany. The honest Harter had to leave school and go to work in a factory. If in later life he was ever tempted to question any of the pronouncements of his more illustrious classmates, I am sure he was firmly told not to meddle in matters beyond his understanding. One might derive from this story a satirical `Harter's Precept' to put alongside Parkinson's Law (bureaucracy expands to the limit of the available resources) and the Peter Principle (one rises in a hierarchy up to one's level of incompetence). Harter's Precept says that the way to advance in academic life is to learn to see what you are supposed to see, whether it is there or not. As Sam Rayburn used to explain to new members of Congress, you've got to go along to get along. Richard Hamilton's The Social Misconstruction of Reality indicates that many social scientists seem to have guided their careers by the light of Harter's Precept. ... Hamilton concludes with an analysis of how major scholarly errors get made and perpetuated: theorists fall in love with their theories, the appearance of scholarship can often pass for the reality, and clever charlatans ... can evade the scrutiny of specialists and appeal directly to those who are all too willing to deceive themselves. Above all, there is the wisdom of Harter's Precept. Revealing that the lens cap is still on the telescope isn't necessarily good for one's career." (Johnson, P.E., "Harter's Precept." Review of "The Social Misconstruction of Reality: Validity and Verification in the Scholarly Community," Yale University Press, 1996. In "Objections Sustained: Subversive Essays on Evolution, Law & Culture," InterVarsity Press: Downers Grove IL, 1998, pp.157-158, 160)

Note that this paleontologist Scott Sampson, `sees' the feathers that are supposed to be there, even though they are actually not there. In fact the BBC article (which was presumably based on Sampson's Nature article, or information supplied by him), states that, "It also had a woolly feather-like plumage" (my emphasis)!

Indeed, so great is the power of Harter's Precept, or what Denton called the "priority of the paradigm":

"Yet no matter how convincing such disproofs might appear, no matter how contradictory and unreal much of the Darwinian framework might now seem to anyone not committed to its defence, as philosophers of science like Kuhn and Paul Feyerabend have pointed out, it is impossible to falsify theories by reference to the facts or indeed by any sort of rational or empirical argument. The history of science amply testifies to what Kuhn has termed the `priority of the paradigm' and provides many fascinating examples of the extraordinary lengths to which members of the scientific community will go to defend a theory just as long as it holds sufficient intrinsic appeal. The defence by medieval astronomers of the Ptolemaic theory the heavens, and by the eighteenth-century chemists of the phlogiston theory of combustion, provide classic examples. ... For the sceptic or indeed to anyone prepared to step out of the circle of Darwinian belief, it is not hard to find inversions of common sense in modern evolutionary thought which are strikingly reminiscent of the mental gymnastics of the phlogiston chemists or the medieval astronomers. To the sceptic, the proposition that the genetic programmes of higher organisms, consisting of something close to a thousand million bits of information, equivalent to the sequence of letters in a small library of one thousand volumes, containing in encoded form countless thousands of intricate algorithms controlling, specifying and ordering the growth and development of billions and billions of cells into the form of a complex organism, were composed by a purely random process is simply an affront to reason. But to the Darwinist the idea is accepted without a ripple of doubt - the paradigm takes precedence!" (Denton, M.J., "Evolution: A Theory in Crisis," Burnett Books: London, 1985, pp.348, 350)

that when an exceptionally well-preserved dinosaur, called Juravenator (which was a close relative of the original so-called `feathered' dinosaur, Sinosauropteryx), was recently found with impressions of its skin where feathers should have been, but weren't, it was still thought to be a "feathered dinosaur", i.e. "It is entirely possible that Juravenator did have feathers, but they simply failed to fossilize"!]

PS: Resuming posting unrelated `tagline' quotes (which may eventually be incorporated into my Quotes Book) critical of Darwinism by pioneering paleoanthropologist, Robert Broom.

"Darwin, in puzzling over the problem of the origin of new species, was greatly interested in the new varieties of pigeons, horses, cattle, and sheep that resulted from the selection and controlled breeding of desirable types. These varieties appear to differ far more from one another than do many species in Nature. Thus a racehorse and a shire appear to differ as much from each other as do a lion and tiger. And the difference between a pouter and a fantail pigeon seems to be much greater than that between a blackbird and a thrush. And if the varieties of horse and pigeon have been brought about by man's selection, why might not the lion and tiger and the blackbird and thrush have arisen by Nature's selection? At first sight it looks as if man by careful selection can produce new species; but apparently this is a fallacy. If a farmer has a fine flock of pure merino sheep, and he is satisfied to go on interbreeding them, he will find in a few years his flock is comparatively worthless as merinos. He has always to be introducing new selected rams." (Broom, R., "Finding the Missing Link," [1950], Greenwood Press: Westport CT, Second edition, 1951, Reprinted, 1975, p.99)