Re: Is ID consistent with atheism? 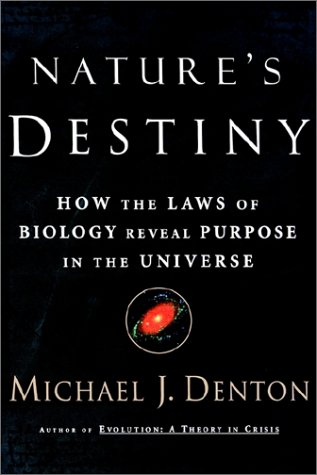 Thanks for your message. As is my usual practice when I receive a private message on a creation, evolution or intelligent design topic, I am replying via my blog, CED,

[Left: "Nature's Destiny: How the Laws of Biology Reveal Purpose in the Universe" (2002), by Michael Denton, agnostic Intelligent Design theorist.]

after removing your personal identifying information.

Thanks, but it is plain Mr Jones.

>I was just curious, as far as my studies go, an Intelligent Design advocate examines what's already designed in the world.

Agreed, but if Intelligent Design is true, then so do even those who deny design, "examine... what's already designed in the world." That is, an early definition of science was, "thinking God's thoughts after Him". If God is in fact the Designer, then even those who deny design, in their scientific researches are thinking the Designer's thoughts after Him.

Yes indeed. An example is intelligent design theorist Michael Denton, who is an agnostic, yet whose position is that the laws of nature are designed, as per the subtitle of his book above: "How the Laws of Biology Reveal Purpose in the Universe":

"Thus the ID movement has become a `big tent,' attracting people from a variety of religious backgrounds. CRSC fellow David Berlinski, who has published Commentary articles critical of Darwinism, is Jewish. In Kansas, board supporters included local Muslims and a group of Hare Krishnas, who showed up at a meeting wearing saffron robes. Even agnostics who believe the universe is in some sense teleological have teamed up with the ID movement--figures like Michael Denton, author of the influential Evolution: A Theory in Crisis. His most recent book, Nature's Destiny, argues that purpose pervades the universe at all levels. `The power of ID is precisely its minimalism,' says Todd Moody, an agnostic and professor at St. Joseph's University in Philadelphia. `It travels light, with no theological baggage.' Among Christians, ID shows promise of uniting often hostile factions, from young-earth creationists to theistic evolutionists and everyone in between." (Pearcey, N.R., "We're Not in Kansas Anymore," Christianity Today, May 22, 2000, Vol. 44, No. 6, p.42).

That is, one could affirm (as Denton does) that there is real design in nature, as a consequence of the laws of nature being designed, without affirming (but not denying-see below) that those designed laws of nature were in turn established by an Intelligent Designer/God.

>And by that token then, logically can't an atheist be an Intelligent Design advocate?

Indeed. To be "an Intelligent Design advocate" all one needs to do is advocate Intelligent Design! That is, that there is real design in nature, as opposed to apparent (i.e. illusory) design as claimed by Darwinists. On Professor Phillip E. Johnson's private ID mailing list that I was once a member of, there was in its early days a French atheist (whose name I cannot recall) who denied the existence of God, but who also advocated Intelligent Design.

One definition of "atheism" is:

"Atheism ... the absence of belief in deities ... lack belief in a personal god. ... skeptical of all supernatural beings .... practical, or pragmatic, atheism ... individuals live as if there are no gods and explain natural phenomena without resorting to the divine. The existence of gods is not denied, but may be designated unnecessary ..." ( Wikipedia).

which would seem to encompass agnosticism:

"Agnosticism ... the existence of God, gods, deities ... is unknown or ... unknowable ... it is not possible to have absolute or certain knowledge of the existence or nonexistence of God or gods; or ... they personally have no knowledge. Agnosticism in both cases involves some form of skepticism. Demographic research services normally list agnostics in the same category as atheists and non-religious people ..." (Wikipedia).

However, that French atheist notwithstanding, ID is probably not consistent with `strong' atheism, i.e. the denial that there is a God, because, while the Designer is not necessarily God, clearly the Designer could be God. Therefore, to advocate that there is real design, but deny that there is a real Designer, while it may not be logically inconsistent, it is difficult to imagine many (if any) holding those two positions simultaneously, although one could oscillate between them as Darwin claimed he did:

"Another source of conviction in the existence of God, connected with the reason and not with the feelings, impresses me as having much more weight. This follows from the extreme difficulty or rather impossibility of conceiving this immense and wonderful universe, including man with his capacity of looking far back wards and far into futurity, as the result of blind chance or necessity. When thus reflecting I feel compelled to look to a First Cause having an intelligent mind in some degree analogous to that of man ; and I deserve to be called a Theist." (Darwin, C.R., in Barlow, N., ed., "The Autobiography of Charles Darwin, 1809-1882: With Original Omissions Restored," [1958], W.W. Norton & Co: New York NY, Reprinted, 1969, pp.92-93).

Purpose in the universe is also implied by the evolution described in Steve McIntosh's "Integral consciousness and the Future of Evolution." It would seem that the panpsychist thesis has won (assuming these new accounts have revealed a closer truth), which implies that spirit (or God) is hard wired into the very fabric of space and time. This leave classical atheism far behind, unless atheism revises itself into something like Buddhism (which also reconnects to spirit).

>...the panpsychist thesis ... which implies that spirit (or God) is hard wired into the very fabric of space and time.
>
This leave classical atheism far behind ...

Panpsychism, i.e. "all is mind", or "the whole universe is an organism that possesses a mind" (Wikipedia) denies Theism, i.e. the existence of an infinite-personal God who is distinct from the Universe that He created and sustains.

Therefore, as the late great Presbyterian theologian Charles Hodge explained, anything that denies Theism, and in particular, Theism's God (which would include Panpsychism) is just another form of Atheism:

"As Theism is the doctrine of an extramundane, personal God, the creator, preserver, and governor of all things, any doctrine which denies the existence of such a Being is anti-theistic. Not only avowed Atheism, therefore, but Polytheism, Hylozoism, Materialism, and Pantheism, belong to the class of anti-theistic theories. Atheism does not call for any separate discussion. It is in itself purely negative. It affirms nothing. It simply denies what Theism asserts. The proof of Theism is, therefore, the, refutation of Atheism.. Atheist is, however, a term of reproach. Few men are willing to call themselves, or to allow others to call them by that name. Hume, we know, resented it. Hence those who are really atheists, according to the etymological and commonly received meaning of the word, repudiate the term. They claim to be believers in God, although they assign to that word a meaning which is entirely unauthorized by usage. ... Language, however, has its rights. The meaning of words cannot be changed at the pleasure of individuals. The word God, and its equivalents in other languages, have a definite meaning, from which no man is at liberty to depart. If any one says he believes in God, he says he believes in the existence of a personal, self-conscious being. He does not believe in God, if he only believes in `motion,' in `force,' in `thought,'' in `moral order,' in `the incomprehensible,' or in any other abstraction. Theists also have their rights. Theism is a definite form of belief. For the expression of that belief, the word Theism is the established and universally recognized term. We have the right to retain it; and we have the right to designate as Atheism, all forms of doctrine which involve the denial of what is universally understood by Theism." (Hodge, C., "Systematic Theology," [1892], James Clark & Co: London, Vol. I, Reprinted, 1960, pp.241-242).

For example, the late Fred Hoyle claimed that the Universe as a whole was "intelligent," which would be a form of Panpsychism, yet he still regarded himself as an atheist.

Intelligent design, by the same reasoning, would be considered atheism. But neither intelligent design, nor panpsychism, endorses atheism despite the claims of Hoyle and others. Panpsychism cannot deny a personal God by the very fact that we people are part of broad reality which includes the physical world. It is only dualism that is being endorsed by the separation of God from God's creation, and I don't think that theism is a restatement of this dualism. Atheism does not even come close to an endorsement of panpsychism, and C.S. Peirce, A.N. Whitehead, Teilhard de Chardin, and C. Hartshorne were not atheists. The atheistic panpsychism of D.S. Clarke is found incoherent, in my view.

>Intelligent design, by the same reasoning, would be considered atheism. ... It is only dualism that is being endorsed by the separation of God from God's creation

ID is compatible with "Theism ... the doctrine of an *extramundane*, personal God, the creator, preserver, and governor of all things" whereas your own comment says that Panpsychism is not compatible with "the *separation* of God from God's creation."

So I stand by my comment that Panpsychism is just another form of Atheism, i.e. Panpsychism, like "Polytheism, Hylozoism, Materialism, and Pantheism, belong to the class of anti-theistic theories."

But as per my Policies stated on this blog's front page, I no longer debate, so this is my last response to your comments, and I will let you have the last word.