Off-topic: Norton Antivirus froze my computer so I switched to AVG Free 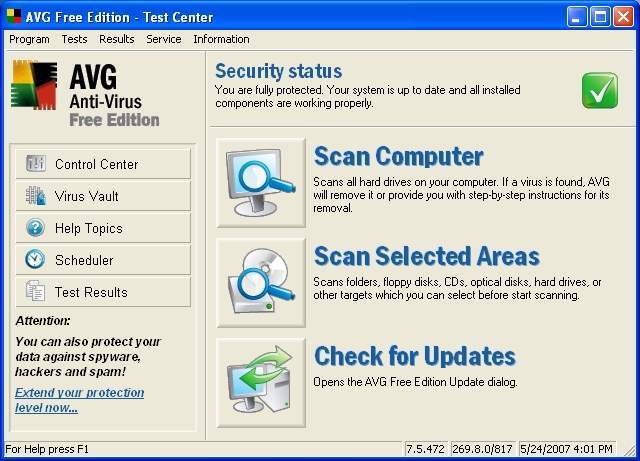 `freezing,' forcing me `hard-boot' it, i.e. to turn it off at the switch and then turn it on again. I could use the computer, but if I left it for a short time, when I came back I found it was `frozen'. It was as though the computer would not `wake up' from sleep mode, with the screen turned off, and not responding to the mouse or keyboard.

After a couple of hard-boots, with the same problem recurring, I decided to go into Control Panel: Power Options and set System standby and Turn off monitor to Never. But even then, when I came back after a short time from using it, I found the computer again frozen, unresponsive to the mouse or keyboard, but this time with the screen turned on and applications running.

I rang the company that I bought the computer from a couple of years ago and described the problem to a technical support person. He said right away that the cause of the problem was probably either: 1) Norton Antivirus, 2) a faulty power supply; or 3) a faulty motherboard, in that order. Then I remembered that Norton Antivirus had that morning updated itself and that the first time my computer froze was while it was running a Norton Antivirus full-system scan. So I removed Norton Antivirus in Control Panel: Add or Remove Programs and for good measure downloaded and ran the Norton Removal Tool.

I already had a copy of AVG Anti-Virus Free Edition on my laptop (which I had installed earlier in the year when I was having problems with Norton Antivirus update repeatedly saying my copy was not licensed and then deciding, correctly, that it was). I have had no problems with AVG, so I installed it also on my desktop computer and the problem of the computer freezing ceased. So the problem was Norton Antivirus. An added bonus is that Excel spreadsheets now load much faster.

There is however a downside to the free edition of AVG, which is that it does not have all the features of a paid full version. In particular, AVG Free Edition will only do scheduled full system scans, not scheduled quick scans of only key parts of a computer system as Norton Antivirus (and I presume AVG's paid edition) does. However, AVG Free Edition can still do manual scans of selected areas and the scheduled full scans run in the background and can be paused or stopped.

I have decided to share this my experience so that it might help others who have similar problems. I am not claiming that Norton Antivirus has a general problem but just that, after working fine for several years, it suddenly became a problem on my system (although the technical support person was obviously aware of similar problems on other computers). Nor am I claiming that AVG has no problems, although I am not aware of any, and this review of AVG Anti-virus Free Edition, described it as, "the best free anti-virus solution available today":

"AVG Anti-virus Free Edition, by Grisoft, is in our books, the best free anti-virus solution available today. It even out-performs many of the well-known commercial anti-virus packages in terms of effectiveness and ease of use. Its no-nonsense resident shield, low resource usage and thorough scanning engine make AVG Free Edition a must for every home user."

PS: See `tagline' quote below by Christian biologist Dr. R. Gary Chiang that what "Evolution Creation debate" and science and the Shroud of Turin have in common is, that "scientists who have based their faith in Naturalism" (i.e. nature is all there is = there is no supernatural = there is no God) "will never admit to the possibility that the Shroud could have wrapped the body of Christ," i.e. if that entails "a supernatural explanation" since "supernatural explanations are ruled out a priori by those scientists who believe that all of nature must be explained in purely materialistic terms."

"What do science and scientists have to do with the Shroud of Turin, an old piece of cloth which folklore describes as being the very linen that wrapped the body of Jesus as it laid in the tomb over 2000 years ago? According to the Roman Catholic Church, which is the current owner of this cloth, the answer is `Nothing.' Science had its chance; now it is time for scientists to leave the cloth alone. Why has the church placed a moratorium on scientific study of this cloth? Could it be that the church is afraid that modern technology will prove the Shroud a fake, and hence, seriously harm the faith of millions of Shroud believers? That is unlikely. Instead, the church has come to the very same conclusion about scientists that this book is attempting to illustrate - the prejudices of a scientist determine how that scientist interprets the scientific facts, more so than any overwhelming scientific evidence that points to one theory being more valid than another. Authorities in the church realize that science and scientists who have based their faith in Naturalism will never admit to the possibility that the Shroud could have wrapped the body of Christ. To admit to this possibility is to also support the conclusion that this cloth was touched by a God who became a real human being for a very short period of time in earth's history. That would be a supernatural explanation, and supernatural explanations are ruled out a priori by those scientists who believe that all of nature must be explained in purely materialistic terms." (Chiang, R.G., "Science meets Religion: Shroud of Turin," in "Overcoming Prejudice in the Evolution Creation Debate: Developing an integrative approach to Science and Christianity," Doorway Publications: Hamilton ON, Canada, 2004)
Posted by Stephen E. Jones at 9:09 PM

the simple solution is to use a Linux based OS. no viruses....ever!

>the simple solution is to use a Linux based OS. no viruses....ever!

Thanks. In a former life I was a system administrator of seven hospital UNIX systems. So UNIX has no fears for me.

When Windows XP came out a few years ago and I was still using Windows 95, I seriously considered switching to UNIX and bought the disk and reference books for Red Hat Linux 9, which I still have.

I just Googled on "Linux + scanner + OCR" and according to this review there is now some scanner OCR under Linux but: a) as described it does not sound as good as my Windows-based OCR; and b) it costs much more: US$1,495 and then an annual maintenance contract of another $299 for Vividata's OCR Shop which is based on the same OmniPage engine that drives my OmniPage for Windows.

So if that is the best that Linux can offer at present, then I will reluctantly have to stay with Windows. I would be interested if you know anything different.

I might add that, apart from having to pay for virus scanning software (and even that is now not an issue with AVG Free), I have been using computers since ~1980 (before there was even Microsoft DOS and my first Windows was version 2.0 in ~1987) and I have only had one major virus infection - the Stoned virus in ~1988. So it would be taking a sledgehammer to crack a nut for me (and I presume most Windows users) to change over to UNIX just to avoid viruses.

You might be interesting in exploring Ubuntu Christian Edition.

There is also an OCR package for it.

Of course, the normal way you would install it is by using the built-in package manager.

In fact, I think you can try all this out without actually installing it on your hard disk. You should just be able to boot to the CD and try it out from there -- including installing new packages like OCR.

>You might be interesting in exploring Ubuntu Christian Edition. There is also an OCR package for it. Of course, the normal way you would install it is by using the built-in package manager. In fact, I think you can try all this out without actually installing it on your hard disk. You should just be able to boot to the CD and try it out from there -- including installing new packages like OCR..

Thanks for the info. I had never previously heard of Ubuntu Christian Edition, nor Ubuntu generally. I note from your OCR link that it uses the tesseract-ocr which I had only yesterday come across in my reading about OCR under Linux.

But as I also said, to change to some version of UNIX just to avoid viruses would be using a sledgehammer to crack a nut, because apart from having to bother with running anti-virus software, viruses have never been a major problem to me, even though I have used computers on almost a daily basis since 1980.

In the meantime, I have thought about getting used to Open Office by installing it on my laptop. Since I don't do any scanning using my laptop, I might consider replacing its XP with Linux as a first step to moving across to Linux.

Nearly two years later I am still using AVG Free on our two computers, and apart from a few minor hiccups, I have had no problems with it.

It has caught two viruses. Also, AVG Free now scans web sites before I click on a link to them and tells me if it is safe. At least one link it told me was infected and not to click on it.

I've got used to the lack of a partial scan with the free version. The full scan comes on at 6 am and after I have my morning Bible study and prayer time, shower and breakfast, I terminate it. I am so used to doing it that I don't think of it as a problem. In fact I had forgotten that it was a problem and only remembered when I read my post above.

I guess in particular, AVG Free Edition will only do scheduled full system scans, not scheduled quick scans of only key parts of a computer system as Norton Antivirus does.

>AVG Free Edition will only do scheduled full system scans, not scheduled quick scans ... as Norton Antivirus does.

Yes, but as I wrote previously, "I am so used to doing it that I don't think of it as a problem."

That is, I have set AVG Free's full scanner to start at 6am, or when my computer starts up, and it presumably scans all the key areas first, and then I pause or terminate the full scan after an hour or so when I want to use the computer.

Norton AV used to regularly tell me my paid version was not paid for and then after minutes of worrying, tell me it was paid for after all! It did not instil confidence in Norton's ability to detect viruses when it couldn't even detect that it was paid for. I don't have that problem with AVG free.

AVG Free has detected every virus before it became a problem and it also detects tracking cookies that might be a problem and I can move them to its Virus Vault. I then can tell Firefox and IE7 (I uninstalled IE8 and it reverted to IE7) to block that cookie site.