Quote of the day: "... one can find support in Darwin's writings for almost any theory of evolution..." (Mayr) 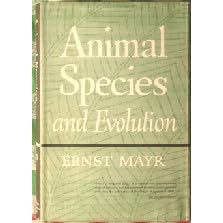 One of the books my wife brought back for me from the USA is the late Ernst Mayr's monumental, ~800 page "Animal Species and Evolution" (1963).

Here is my first "quote of the day" from it, that "one can find support in Darwin's writings for almost any theory of evolution":

"Yet on the whole Darwin was the first to make a serious effort to present evolutionary events as due to a balance of conflicting forces. Indeed, he often went too far in compromising. It has been claimed, not without justification, that one can find support in Darwin's writings for almost any theory of evolution: speciation with geographic isolation or without it, direct effect of the environment or merely selection by the environment, evolutionary importance of large genetic changes or of small ones, and so on. This explains the paradox that the term `Darwinism' means such different things to an American, a Russian, or a French biologist." (Mayr, E.W., "Animal Species and Evolution," The Belknap Press: Cambridge MA, 1963, p.2).

which helps explain Darwin's (and Darwinism's) success, for how does one falsify "almost any theory of evolution"?!

Genesis 16:7-10,13. 7The angel of the LORD found Hagar near a spring in the desert; it was the spring that is beside the road to Shur. 8And he said, "Hagar, servant of Sarai, where have you come from, and where are you going?" "I'm running away from my mistress Sarai," she answered. 9Then the angel of the LORD told her, "Go back to your mistress and submit to her." 10 The angel added, "I will so increase your descendants that they will be too numerous to count." ... 13She gave this name to the LORD who spoke to her: "You are the God who sees me," for she said, "I have now seen the One who sees me."
Posted by Stephen E. Jones at 8:41 AM