COLUMBUS, Ohio -- Planetary scientists have found evidence of a meteor impact much larger and earlier than the one that killed the dinosaurs -- an impact that they believe caused the biggest mass extinction in Earth's history. [Also at: ABC, BBC, Nature, PhysOrg.com, SPACE.com & Sydney Morning Herald.]

The 300-mile-wide crater lies hidden more than a mile beneath the East Antarctic Ice Sheet. And the gravity measurements that reveal its existence suggest that it could date back about 250 million years -- the time of the Permian-Triassic extinction, when almost all animal life on Earth died out. [I was inclined to accept this, but after reading the Nature article where most geologists contacted seemed to be sceptical, I had second thoughts. A problem is when and where it was (see below).

Its size and location -- in the Wilkes Land region of East Antarctica, south of Australia -- also suggest that it could have begun the breakup of the Gondwana supercontinent by creating the tectonic rift that pushed Australia northward. [This was not when Gondwana "began to break up in the mid- to late Jurassic (about 167 million years ago)," i.e. 84 million years after the Permian extinction, which was ~251 million years ago!

And the crater is not where Gondwana began to break up, which was between Antarctica, South America, Africa, and India [Graphic: "East African and Kuungan Orogens",Wikipedia]; whereas the claimed crater is between Australia and Antarctica, which as this article points out, that split was "100 million years ago", i.e. 150 million years after the Permian extinction!

However, if this does turn out to be a crater, then it may well have been a factor in creating a fault line that later, after Gondwana had been breaking up for ~70 million years, Australia and Antarctica later separated along. Perhaps that is all that is being claimed?]

Scientists believe that the Permian-Triassic extinction paved the way for the dinosaurs to rise to prominence. The Wilkes Land crater is more than twice the size of the Chicxulub crater in the Yucatan peninsula, which marks the impact that may have ultimately killed the dinosaurs 65 million years ago. [As the Nature article notes, most geologists consider it was "when a vast volcanic eruption released a flood of lava to create the Siberian Traps - an area of basalt that covers an area larger than Europe" which was "the biggest volcanic event of all time, and coincide precisely with the extinction." Although if this turns out to have been a be a "300 miles wide" crater, then its shock waves could well have been the trigger for that eruption, as according to this map, 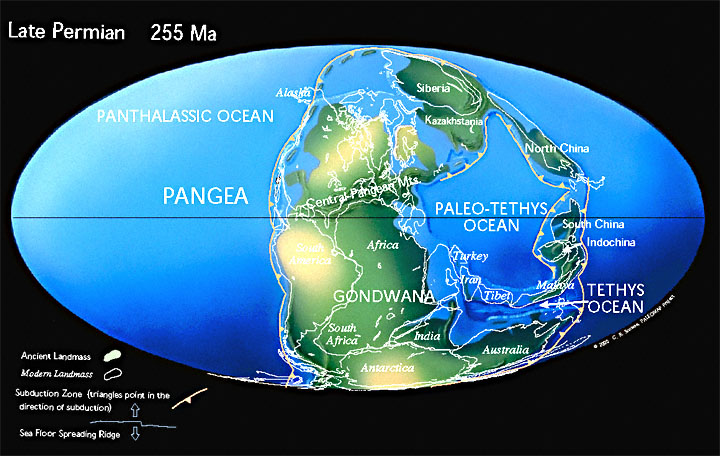 Antarctica and Siberia seem to have been then roughly opposite through the centre of the globe.]

The Chicxulub meteor is thought to have been 6 miles wide, while the Wilkes Land meteor could have been up to 30 miles wide -- four or five times wider. "This Wilkes Land impact is much bigger than the impact that killed the dinosaurs, and probably would have caused catastrophic damage at the time," said Ralph von Frese, a professor of geological sciences at Ohio State University. He and Laramie Potts, a postdoctoral researcher in geological sciences, led the team that discovered the crater. Approximately 100 million years ago, Australia split from the ancient Gondwana supercontinent [See above on the timing mismatch] and began drifting north, pushed away by the expansion of a rift valley into the eastern Indian Ocean. The rift cuts directly through the crater, so the impact may have helped the rift to form, von Frese said. [Or alternatively, the rift caused an eruption that left a circular lava magma dome?

Whatever caused the Permian extinction - not to mention the other four of the `Big Five' mass extinctions:

"When a paleontologist is asked how many mass extinctions there have been, the invariable answer is five: one each in the Ordovician [~450 mya], Devonian [~365 mya], Permian [~250 mya], Triassic [~200 mya], and Cretaceous [~65 mya] periods-events known as the Big Five. When asked what went on in between, he or she usually replies that there was a continuous, low level extinction called `background' with, perhaps, a few pulses above background but not large enough to be called mass extinctions." (Raup, D.M., "Extinction: Bad Genes or Bad Luck?," [1991], Oxford University Press: Oxford UK, 1993, reprint, pp.65-66. Parentheses mine)

the bottom line is that without it (and indeed all of them) we would not be here! I base this on the Capra-Gould "Wonderful Life" principle that even "small and apparently insignificant changes lead to cascades of accumulating difference":

"The greatest expression of contingency-my nomination as the holotype of the genre-comes near the end of Frank Capra's masterpiece, it's a Wonderful Life (1946). George Bailey (Jimmy Stewart) has led a life of self-abnegation because his basic decency made him defer personal dreams to offer support for family and town. His precarious building and loan association has been driven to bankruptcy and charged with fraud through the scheming of the town skinflint and robber baron, Mr. Potter (Lionel Barrymore). George, in despair, decides to drown himself, but Clarence Odbody, his guardian angel, intervenes by throwing himself into the water first, knowing that George's decency will demand another's rescue in preference to immediate suicide. Clarence then tries to cheer George up by the direct route: `You just don't know all that you've done'; but George replies: `If it hadn't been for me, everybody'd be a lot better off.... I suppose it would have been better if I'd never been born at all.' Clarence, in a flash of inspiration, grants George his wish and shows him an alternative version of life in his town of Bedford Falls, replayed in his complete absence. 'This magnificent ten-minute scene is both a highlight of cinematic history and the finest illustration that I have ever encountered for the basic principle of contingency-a replay of the tape yielding an entirely different but equally sensible outcome; small and apparently insignificant changes, George's absence among others, lead to cascades of accumulating difference. Everything in the replay without George makes perfect sense in terms of personalities and economic forces, but this alternative world is bleak and cynical, even cruel, while George, by his own apparently insignificant life, had imbued his surroundings with kindness and attendant success for his beneficiaries. Bedford Falls, his idyllic piece of small-town America, is now filled with bars, pool halls, and gambling joints; it has been renamed Pottersville, because the Bailey Building and Loan failed in George's absence and his unscrupulous rival took over the property and changed the town's name. A graveyard now occupies the community of small homes that George had financed at low interest and with endless forgiveness of debts. George's uncle, in despair at bankruptcy, is in an insane asylum; his mother, hard and cold, runs a poor boarding house; his wife is an aging spinster working in the town library; a hundred men lay dead on a sunken transport, because his brother drowned without George to rescue him, and never grew up to save the ship and win the Medal of Honor. The wily angel, clinching his case, then pronounces the doctrine of contingency: `Strange, isn't it? Each man's life touches so many other lives, and when he isn't around he leaves an awful hole, doesn't he? ... You see, George, you really had a wonderful life." (Gould, S.J., "Wonderful Life: The Burgess Shale and the Nature of History," [1989], Penguin: London, 1991, reprint, pp.287-288)]